15 Years Ago, the Intelligent Design Movement’s ‘Wedge Document’ Was Exposed

On February 5, 1999, the Wedge Document was first uploaded online for the world to see. The document, produced by the Discovery Institute, explained the “master plan” of the Intelligent Design movement: 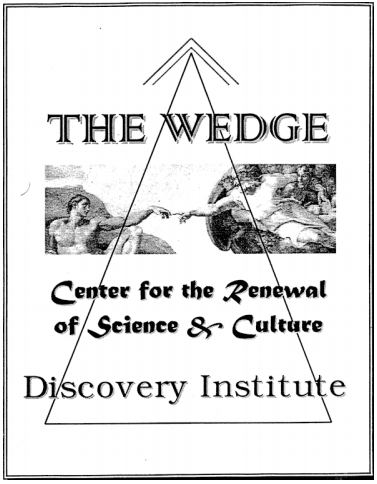 The document said they would accomplish this, in part, by publishing research in credible journals (ha!), publicizing that research through outlets like television, books, and newspaper op-eds, and injecting ID into public school curriculums (suing districts if necessary).

Since then, the Discovery Institute itself has become something of a non-entity. They keep trying to reclaim their glory, but the courts have generally remained on the side of real science. There are always districts and states that manage to water down science curriculums (see: Texas) but those fights don’t seem to be lasting as long anymore. The new battles are taking place in charter schools that teach Creationism despite receiving taxpayer-funded vouchers and the occasional districts that attempt to “teach the controversy.”

Josh Rosenau, writing for the National Center for Science Education, says the proponents of the Wedge Document failed on their own terms:

And now it’s just another artifact on the path toward the destruction of science. A mile ahead are the Creation Museum and Bobby Jindal. It’s a long road. Still, the destination is within our sights.

February 8, 2014
The Story Behind the Christian Oscars
Next Post

February 8, 2014 An ESPN Reporter Giggles When NBA Star Kevin Durant Gives Credit to God in Interview, and the Internet Goes Crazy
Browse Our Archives
What Are Your Thoughts?leave a comment