Ken Ham: The Debate Audience Wasn’t All White! There Were At Least Two Dark-Skinned People There! February 7, 2014 Hemant Mehta

Ken Ham: The Debate Audience Wasn’t All White! There Were At Least Two Dark-Skinned People There!

Creationist Ken Ham is not happy with Time magazine (so, hey, we have that in common) because of how one of their bloggers characterized the audience for Tuesday night’s debate against Bill Nye:

2 minutes [into the debate]. Nye, in his signature bowtie, and Ham, with his Aussie accent, hop on stage, shake hands, and ready themselves behind their respective Apple laptops (only Nye’s has stickers). Nye stands on the left. Ham is on the right. The cameras pan to an all-white audience.

Ham is upset because the audience was totally not just white people and he quotes one of the commenters on Time‘s website to prove it:

All-white audience? In the second row there was a distinguished-looking man with very dark skin, and in the third row was another African-American man. I didn’t have to look any further than the first three rows to know that the Time reporter was dead wrong. See for yourself at a recording of the debate, found at www.debatelive.org . Makes me wonder if I can really trust this writer and her observational skills. I wonder, too, if Time.com will now place a “sic” next to the obviously wrong claim. So, editor, will you please?

A few thoughts about this:

Elizabeth Dias, the Time writer, was live-blogging the debate using the livestream. I was doing the same thing, and when I saw the camera pan across the audience, I noticed the lack of diversity, too: 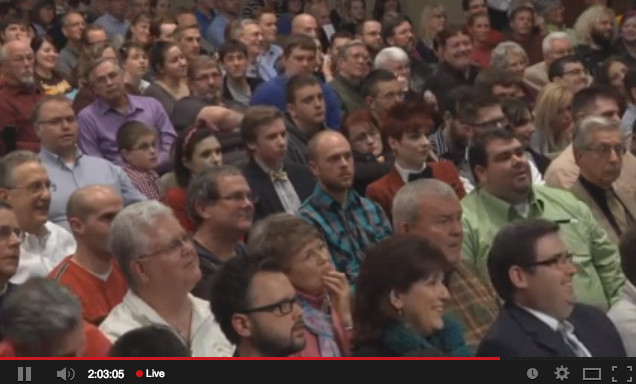 Here’s the thing about live-blogging; if it’s interesting, it’s reactionary and spontaneous and maybe even comical. I would never read what Dias wrote there and assume anything beyond “The audience has a lot of white people in it.” To read more into her comment, or to claim it suggests racism on the part of Answers in Genesis, or to say she was accurately depicting the crowd as an on-the-scene journalist might, says to me you don’t really understand the nature of live-blogging versus reporting.

Yet that’s precisely what Ham doesn’t get:

So what kind of agenda did this writer have in writing such a wrong thing? Was she trying to imply that we were somehow able to stop people with dark skin from attending the debate? She is probably not even aware that just a few yards from the debate hall is a major exhibit inside our Creation Museum where we present the biblical message that, biologically and biblically, there is only one race. We also explain in our anti-racism exhibit that each person has the same main basic pigment in their skin — just different amounts of it, and thus there are different shades of brown skin.

The writer’s “agenda” was to point out what she saw — which is the same thing that I saw — which is that there weren’t a lot of colored people in the crowd. People can interpret that as they want to — Does it mean people of color weren’t interested in seeing (or able to see) the debate live? Does it say more about the demographics of that part of Kentucky? — but even the commenter that Ham cited saw only two people of color in an audience that was nearly a 1,000 people strong. Dias’ point is exaggerated but not by that much.

Dias even “corrected” herself 30 minutes later (without prompting from Ham):

36 minutes [into the debate]. Students are being indoctrinated by the confusion of terms. “You can’t observe the age of the earth. You can’t see that.” The camera finally finds the first African American face in the audience.

We can re-watch the video of the debate and play “Where’s Black Waldo?” even more, but I don’t think you’d find anything too surprising. A few people of color. A lot of white people.

Look: Ken Ham’s not a racist. He believes a shitload of crazy things, but none of them involve the superiority of certain skin colors. He’s just trying to create controversy where there’s none to be found. Time has nothing to apologize for in this case. Dias made an observation I saw many people making on Twitter. They weren’t condemning the Creation Museum or suggesting that people of color weren’t allowed in the debate hall; they were only pointing out what so many others online had also noticed.

February 7, 2014 South Dakota Bill That Would Have Allowed Teachers to Promote Intelligent Design in School is Killed by Its Sponsor
Browse Our Archives
What Are Your Thoughts?leave a comment