I really hate the fact that a British judge gave the nod to this petty, doomed-to-failure legal case brought against Latter-Day Saints Church president Thomas S. Monson (pictured below).

Let’s do this Q&A-style. 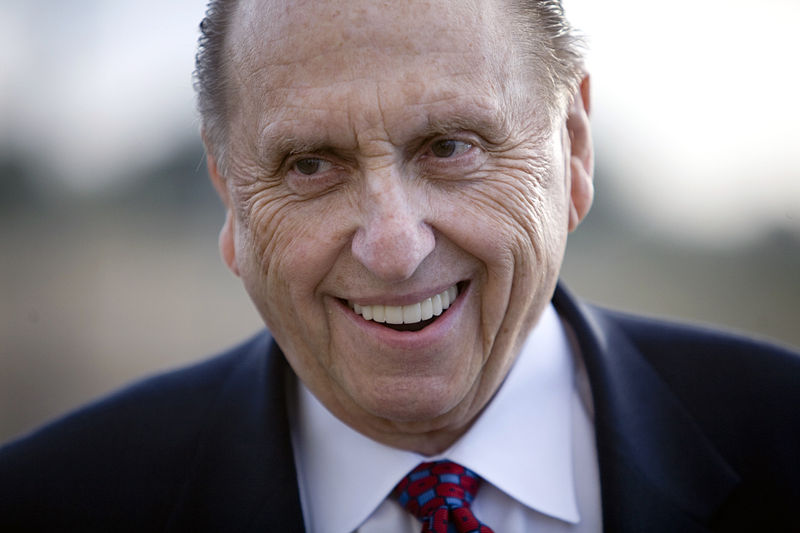 Who’s trying to sue Monson, and why?

Meet Tom Phillips, who served in England as a Mormon Bishop before deciding ten years ago that it wasn’t for him. He left the Church, became an atheist, and now writes for and edits MormonThink, a website critical of the Mormon faith. Phillips lodged a fraud complaint with a court in England, identifying two British subjects, Stephen Bloor and Christopher Ralph, as Monson’s victims.

What’s Monson done that got him in trouble?

Nothing that any clergy member of any faith on earth doesn’t do every day. He promotes irrational, unfactual religious beliefs. But the plaintiffs claim that because the LDS Church both asks for tithes and tries to make people believe fairy tales, somehow Mormon leaders are guilty of deceiving and defrauding them. The complaint references the Fraud Act of 2006, a British law that criminalizes making false representations in order to profit financially.

Hmm. That’s all this is?

That’s it. See for yourself. 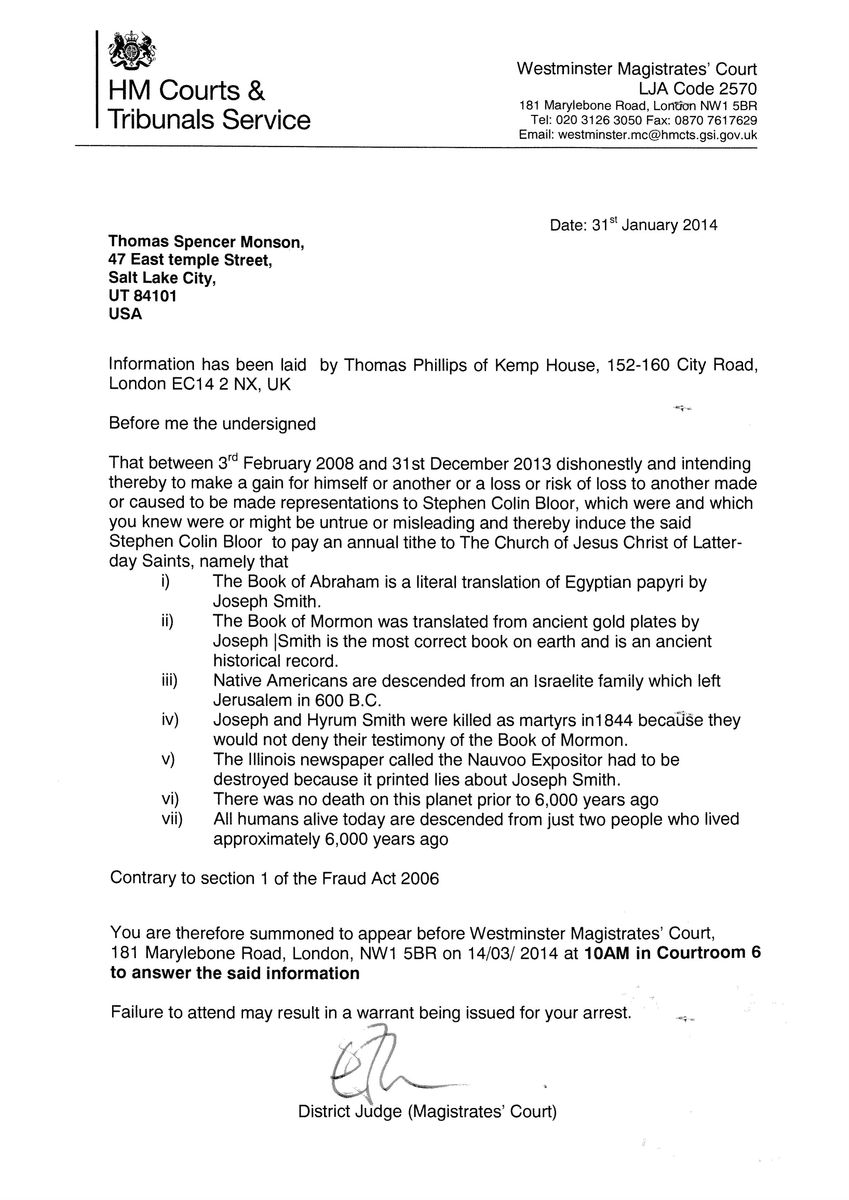 Wow. Those articles of faith are a little out there.

Yup. Mormonism is a  religion whose theological fatuousness ought to be self-evident, which is another reason I can’t take the supposed aggrievement of the plaintiffs very seriously. It’s a little late to act butthurt now, if you’ve been naive enough for 33 years to buy and promulgate the LDS codswallop, as Phillips did. I mean, LDS doctrine mandates a belief in “spirit prison,” magic underwear, multiple universes ruled by different gods, et cetera. In other words, kooky stuff. But neither believing in kookiness nor spreading it is a crime. Good thing too, or we’d have to build twice as many prisons.

Does the complaint hold water?

I think all religions are phantasmagorical nonsense, but you’re probably asking if Phillips could prevail. He’d have to prove that Monson doesn’t believe the horseshit the LDS Church peddles. Unless Phillips has some smoking gun up his sleeve, that won’t happen. You can’t prove what some guy in his heart of hearts truly believes.

I see that Monson has been ordered to appear in a London court on March 14. Will he show up?

I will personally boil a Book of Mormon if he does, and eat it with some fava beans and a nice chianti.

Then won’t the Brits ask for his extradition?

Pretty much inconceivable. Not over a case as stupid and dubious as this one. Even if they did, the United States wouldn’t and couldn’t comply. More on that in a minute.

What do British legal experts think of the case?

Neil Addison, who is a former crown prosecutor and writes about religious freedom, told journalists that he is incredulous: “I’m sitting here with an open mouth. … This is just using the law to make a show, an anti-Mormon point. And I’m frankly shocked that a magistrate has issued [the summons].” Solicitor Harvey Kass says the whole thing is bizarre. “I can’t imagine how it got through the court process,” he said. “It would be set aside within 10 seconds, in my opinion.”

Temporary insanity. An early April Fool’s joke. A wicked desire for infamy. Honestly, I have no idea. I do predict with some confidence that the magistrate who okayed this, the honorable Elizabeth Roscoe, won’t be elected Judge of the Year.

Could this kind of thing happen on U.S. soil?

I asked my friend Marc Randazza, a first-class free-speech lawyer. His words: “Not a chance. There is the ministerial exception: the First Amendment bars courts from getting involved in matters of a purely ecclesiastical nature.”

What does he think of the case?

Not much. “If I purported to be a Scientology theologian, knowing it’s all bullshit, but I then sold you E-meter readings for $1,000 a pop, you could sue me for fraud,” Marc explained. “But you’d need to prove that I actually thought it was false. On the other hand, I’m not committing fraud if I sincerely believe in the magic boogie boogie monster, and I convince you to join my new religion, even if you were to discover later that it’s all bullshit.”

What does this have to do with free speech?

We’re all entitled to our beliefs, and we’re allowed to spread them as best we can. I hate to see people get harassed with lawsuits, even if I disagree with what they stand for. If Monson can get hauled into court on so flimsy a charge, in another country no less, an organization that you and I like could be next. Wouldn’t we protest if the reverse happened? If an atheist group got judicially pestered by a former employee with an axe to grind — someone who converted to Christianity and now claims that those damn atheists don’t really accept evolution? I sure would.

Also, as Marc says, “If Monson can be summoned to the UK for this, then why can’t Saudi Arabia summon Larry Flynt?”

Thomas Monson has just as much right to declare his beliefs — deeply held or not — as any of them. We muzzle him at our peril.

February 7, 2014
Yesterday, Another Arizona Legislator Delivered a Godless Invocation on the House Floor
Next Post