Todd Starnes of Fox News Lies Again: A School Did Not Cancel ‘Merica Monday’ Because It Would Offend Non-Americans February 6, 2014 Hemant Mehta

Todd Starnes of Fox News Lies Again: A School Did Not Cancel ‘Merica Monday’ Because It Would Offend Non-Americans

Fox News’ Todd Starnes has a nasty habit of parroting every story of Christian persecution he hears… even if there’s no truth to them.

Starnes is back in top form now, writing about Fort Collins High School in Colorado because administrators supposedly decided to cancel a spirit day honoring America because they didn’t want to offend non-Americans:

The student council at Fort Collins High School had proposed having a day to celebrate the United States during next week’s Winter Spirit Week. The young people pitched “’Merica Monday” and invited their classmates to dress in patriotic colors. Their proposal was promptly shot down by administrators.

“They said they didn’t want to be exclusive to any other country,” a 17-year-old member of the student council told me.

The irony, said the students, is that they are required to participate in Cinco de Mayo celebrations. One member of the student council pointed out the hypocrisy — and noted that students were not being forced to dress in red, white and blue for “’Merica Day.”

“We were confused why we couldn’t do one day that was for America,” the student told me.

Of course, the reality of the situation is that Starnes chose to ignore the school’s side of the story because it didn’t fit into his jingoistic narrative.

The school realized after the spirit day had been announced that “’Murica” is a popular online slang term that conjures up an image of a stereotypical Southerner who loves the country a little too much: 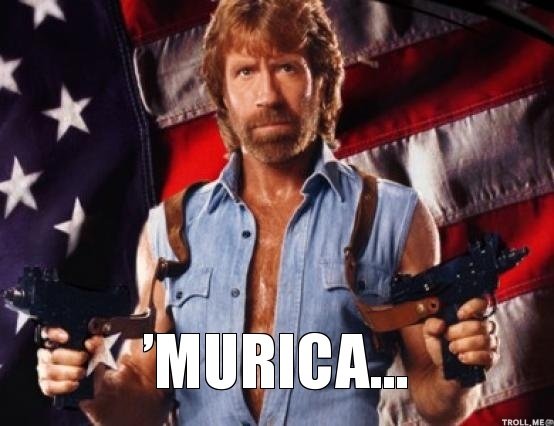 That was the problem. That was the only problem, as Poudre School District officials explained on Tuesday:

When students first proposed Merica Monday, building administrators felt that it was against this unifying theme and disrespectful to our country. Merica is a slang term that is often used in a negative, stereotypical way to describe life in the United States. This is what led administrators to discuss alternatives with students.

We were surprised that our community interpreted these actions as anti-American. Fort Collins High School is a proud public school in America and supports many activities to celebrate this great nation. Due to this outpouring of sentiment and misinterpretation of intentions, school administrators have decided to rename the first day of Spirit Week America Day as opposed to Merica Day.

We look forward to enjoying the creativity and energy of FCHS students as they celebrate their patriotism next week.

I’m sure we can expect an apology letter from Starnes very soon. As soon as he catches up with his corrections from everything he published in December.

February 6, 2014 An Open Letter To Abu Bakr al-Baghdadi — a Young Stranger, Six Thousand Miles and a Dozen Years Away
Browse Our Archives
What Are Your Thoughts?leave a comment