President Obama, at Prayer Breakfast, Defends Rights of Those with ‘No Faith At All’ February 6, 2014 Paul Fidalgo

President Obama, at Prayer Breakfast, Defends Rights of Those with ‘No Faith At All’

Let us take it as a given that the President of the United States’ participation in the National Prayer Breakfast his highly problematic to say the least. When we make a tradition of the elected chief executive publicly kissing the ring of sectarian religion, it turns it into a quasi-official event, flying in the face of basic secularism and the Constitution. It’s a bad thing.

All that said (and said with fervency), via RNS’s Brian Pellot, we learn that at said breakfast, President Obama had a positive message that we secularists wholeheartedly embrace: the need for people of all religions and of no religion to believe and express themselves as they will, without threat of retaliation, discrimination, or criminalization. 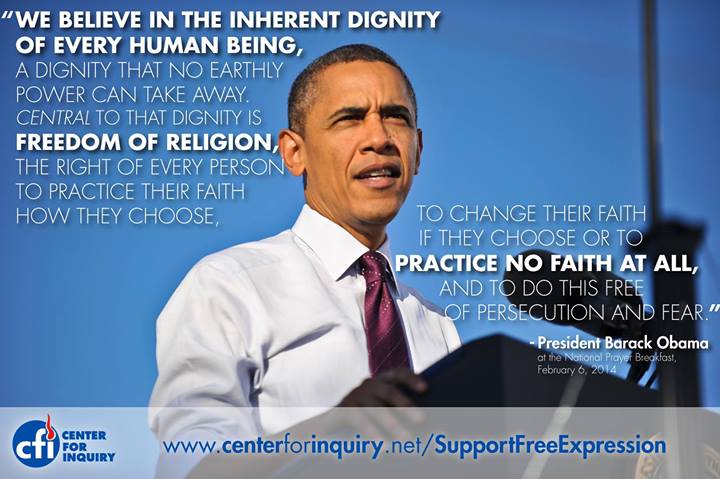 And, importantly, it was said before a conservative religious audience. The president said:

We see governments engaging in discrimination and violence against the faithful. Sometimes religion is twisted in an attempt to justify hatred and persecution against other people just because of who they are, how they pray, or who they love… We believe in the inherent dignity of every human being, a dignity that no earthly power can take away. Central to that dignity is freedom of religion, the right of every person to practice their faith how they choose, to change their faith if they choose or to practice no faith at all, and to do this free of persecution and fear.

It would have been far more powerful if Obama had uttered the dreaded “atheist” word — or at least the less politically fraught “nonbeliever” — to specifically reference the threat faced by that particular group. Even better, he could have mentioned the harrowing cases of particular individuals such as Indonesia’s Alexander Aan, Saudi Arabia’s Raif Badawi, Egypt’s Alber Saber, and the many, many others who suffer imprisonment, persecution, and mortal threats for their lack of religious belief.

But at the very least, the president has the right idea, and is making clear his stance on global religious freedom includes nonbelievers, even if this time he didn’t use one particular word or other. At the Center for Inquiry, my organization, we’re sharing an image highlighting the president’s words from today (included here in this post), and we’re asking folks to let their government know that they support free expression and freedom of belief around the world. You can do it, too.

February 6, 2014
Catholic Hospital Receptionist Allegedly Tells Couple That Atheists Should Not Be Allowed to Reproduce
Next Post