Redditor chuckyourface says he was in for a surprise when he took his wife to the hospital for some tests the other day.

At the check-in desk,

The lady asked [her] all the usual questions including “Do you have a religious preference?” She answered no, because she really has no preference. She doesn’t identify as atheist or anything else, because it’s all too stupid basically. So I asked the receptionist, “If she says ‘no preference,’ does that mean the hospital gets to pick?,” and she said she just clicked ‘no preference.’

That should have been the end of the conversation, but she went on to say in all her time doing this, she’s had two people claim [to be an] atheist. One was a typical punk teenager with black eye-liner, and just didn’t know any better. The other really surprised her though because she was a sweet lady and had two cute kids with her. “How can she say atheist in front of these kids?! You shouldn’t be allowed to reproduce if that’s how you feel. That’s just my opinion.“ 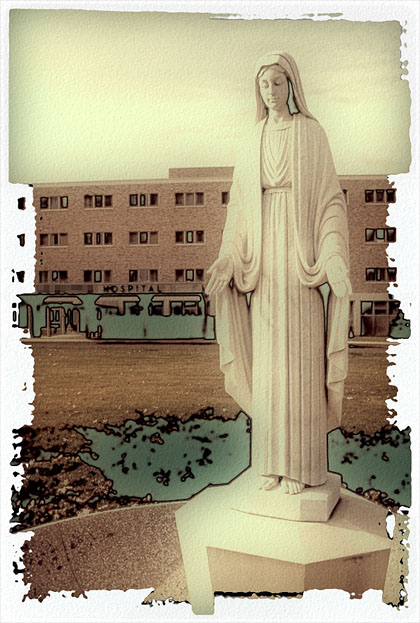 We were shocked, just sitting there with the most obvious fake forced smiles, trying not to say she shouldn’t be allowed to reproduce or interact with the public.

But the woman wasn’t quite done yet.

She went on to complain about HIPAA. In the good old days, preachers could come in and get a printout of all the patients. The Baptist preachers got the Baptist list, the Catholics got the Catholics, etc. But now HIPAA has ruined that and they have to know the name of a patient to get in.

It took everything I had to be quiet, but my [wife] absolutely hates confrontation about religion and this was her appointment so I’ll save my battle for the next time. I have considered reporting this to administration, but it is a Catholic-owned hospital so I’m sure she’d just get an award.”

For reasons I can’t yet share, I believe the receptionist works at a hospital somewhere in the greater Oklahoma City area. I’m hoping to learn more, but a story like this is hard to verify. If the receptionist denies it happened, it’s her word against the word of the couple. Still, I have no compelling reason to doubt chuckyourface’s account.

I’ll make some calls if I learn in what hospital this allegedly took place. Should I find out more, count on an update.

This was in Oklahoma at a Mercy Memorial hospital. Unfortunately, that is the only hospital within a 50 or 100 mile radius that I know of, so it’s our only option. It is Catholic-owned and managed, so of course there are crucifixes on every wall. I didn’t catch the receptionist’s name, but she was in room 4 of admission. The date was Monday 2/3/14.

I filled out an online complaint form and was promised a call within three business days.  I’ve pasted below what I submitted on that form. …

I’d rather not my full name or profession be listed. I am fully “out” with my family and friends, but not my coworkers. My boss is quite religious and I’m not sure how she would react just yet.

I’m making a call to Mercy Hospital management next. More as this story develops.

***UPDATE 2, 20 minutes later:*** Talked to Mercy Hospital’s press officer Rachel Wright, who promised to look into it and get back to me. She did answer “no” to the question if the hospital condones the receptionist lobbing bigoted statements like that, rightfully pointing out that the employee said “That’s just my opinion.”

February 6, 2014
Australian Journalist Asks About Ken Ham: 'How Did He Get Out?'
Next Post