An Open Letter To Abu Bakr al-Baghdadi — a Young Stranger, Six Thousand Miles and a Dozen Years Away

First he fires a semi-automatic weapon, then he tells us who the bullets are for. For infidels. Insha’Allah. 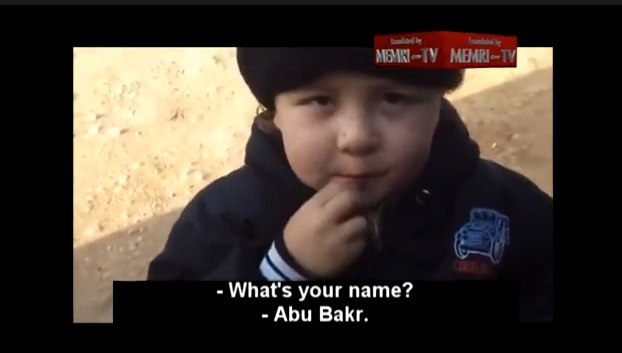 Imagine this beautiful four-year-old kid, but unsoiled by adult hatred and indoctrination, on a playground in Beirut or Amsterdam or New York. Imagine him drenched in late-afternoon sunlight, and in the easy, near-inexhaustible love of parents and siblings whose thoughts are free of revenge, rancor, and rage. Think of what he could accomplish, down the line, with his friendly demeanor, his engaging smile, and his bright mind.

Now picture what he may become instead, surrounded by believers who teach him savagery and murder; who poison his mind with images of a vengeful god demanding blood; who show him kindness on the condition that he’ll be their pliable, gun-toting automaton.

What a cute, delightful little boy.

And, if neither he nor his minders come their senses, what a loss.

You listen to me, Abu Bakr al-Baghdadi. I will leave this letter to you right here, on the off-chance that in 10 or 12 or 15 years, you’ll have learned a smattering of English, and your curiosity will lead you to search the Internet for your family name.

You let me know how I can help you. I’m just a sentimental old coot halfway around the world, and I have about as much power as sense, but give me a chance and I think I could do something for you.

I can send you books. Let me know what interests you.

I can, who knows, help get you a scholarship of some kind. If you want me to, I’ll try, anyway.

Just maybe, me and my friends, people from different countries, all walks of life, and with all kinds of spiritual beliefs (and some who, like me, don’t believe in God at all) can help you understand something: that the world isn’t what you probably think it is.

It is comprised of so much beauty and mystery and human kindness — sometimes it makes you laugh, and sometimes it almost makes your heart burst. I would love for you to sample what I mean. Perhaps you already have, a bit — but there’s much, much more. Are you game, Abu Bakr?

If you get a chance, open a biology book, or watch a few National Geographic videos on YouTube (is that still around?), and marvel at how alike and interconnected we all are — no matter where and how we live.

I want you to know that adventure doesn’t have to start by shoving a clip into a gun and jumping onto the bed of a pickup truck headed for mayhem. It can begin instead by looking at the firmament, and wondering, and dreaming.

It can continue by learning things that holy texts never talk about. Things like science. Poetry. Architecture. Music. Technology.

Some day soon, look up through a telescope, if you can find one. Get a feel for how vanishingly small you are.

Have you ever seen the photo I’m attaching? Every once in a while I find myself staring at it. It’s called the Pale Blue Dot, a name that an influential astronomer gave it. It’s a picture taken by a camera on a man-made spacecraft that had, at the time, been traveling for twelve years at a speed of 40,000 kilometers an hour. 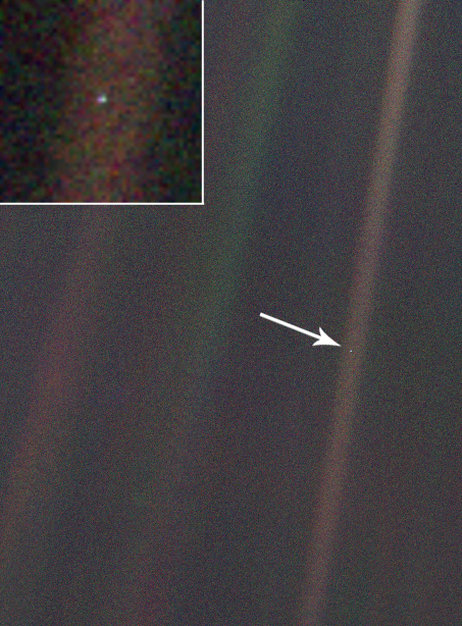 That dot, that pixel? That’s Earth. The astronomer reminded us that everyone we love and hate, everyone we know and don’t, every human being ever, lives — or lived — on that speck.

The photo was taken from the edge of our solar system, about 6,000,000,000 kilometers away. And that’s already mindblowing.

But do you know how many galaxies exist in the observable universe, Abu Bakr? Scientists say it’s over 100,000,000,000. It’s impossible to fathom. Let’s just say there are more stars and planets than you and I and everybody we know could count if counting was all we did until our last breath.

When you look at the picture, or through that telescope, try to intuit how short your life will be in that inky vastness of space and time. Even if you live to be 120, it’s nothing. The length of a finger snap, the duration of a syllable. Still, when you’re young, it seems like an ocean of time. It’s certainly enough to try and make a difference. When the end comes, how will we have mattered? What will you do in the remaining milliseconds of spacetime that make up the rest of your life?

When you were four years old, Abu, you made promises that you didn’t understand and don’t have to keep. If you’ll consider a stranger’s advice, don’t waste another thought on what you said. Don’t dwell on what you saw or what they made you do. Your past is unchangeable, but your future doesn’t have to be unknowable. Despite what you may have been taught about divine destiny and duty to God, you have a say, a choice. Your future is yours to shape, because, like the rest of the billions of people on that blue dust speck, you’re no one’s puppet. You are in control of what you do next. Maybe that’s terrifying at first, but it’s more than a little liberating once you let it sink in.

I don’t know about you, but sometimes, my faraway friend, I get so bone tired of living in a world of tribes and cliques. When I come down from my natural state of mild agitation — which isn’t often enough — I wish we could all laugh our apprehensions and fears away, and find ways to reach across these stupid walls that immure us. That’s why I’m writing to you. Reaching.

I have a feeling you’ll be in my thoughts a lot.

Respond when you can, and if you want. Realistically, I don’t suppose I’ll ever hear from you, but stranger things have happened.

Meanwhile, be well… and above all, be good.

February 6, 2014
Todd Starnes of Fox News Lies Again: A School Did Not Cancel 'Merica Monday' Because It Would Offend Non-Americans
Next Post