Was the Creationism Debate Worth It? February 5, 2014 Hemant Mehta

Was the Creationism Debate Worth It?

When Ken Ham first announced that he would be debating Bill Nye, my reaction was something like this:

I couldn’t believe Bill Nye would agree to it. It was an easy PR win for Ham and the Creation Museum. Creationism would be on the same stage as evolution (when it shouldn’t even be in the same country) and that alone was reason enough to say no.

But having watched the debate last night, I’ve come to a slightly different conclusion.

It wasn’t as bad as I thought it would be.

I thought Nye’s science was valid but probably over a lot of viewers’ heads. The overload of information was probably not the sort of thing that would convince many Creationists to change their minds — but Ham did nothing to convince anyone to accept Creationism. If anything, he gave away the game. He admitted what those of us who follow this stuff already knew: Creationism is purely faith-based, not at all based on scientific evidence.

Though he didn’t put it like this, Ham made it clear that the only way his worldview made sense was if you were a Christian. Most Creationists would try to argue that their arguments make sense even if you weren’t a Christian; Ham was having none of that. Meanwhile, Nye made the point that evolution made sense regardless of your religious beliefs (or even in spite of them).

Perhaps the most telling moment of the evening came when Nye and Ham were asked what it would take to get them to change their positions. 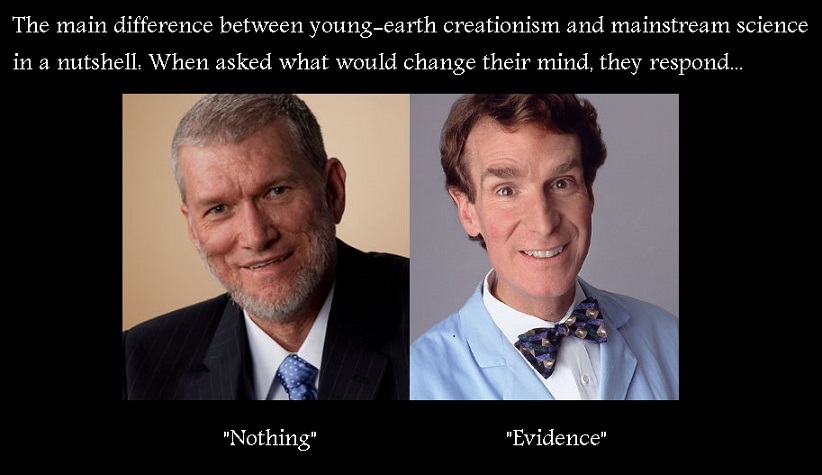 Nye put it simply: Show me the evidence.

Ham flubbed it, saying (and I hope I got this right), “No one is ever going to convince me that the word of God is untrue.” It was the one thing he shouldn’t have said and it doesn’t get more clear than that.

Even their presentations alluded to the same idea:

The rest of Ham’s arguments were no better. He kept referring to the fact he had PhDs on his staff, as if an argument from authority would convince people that he was onto something, as if there aren’t fringe minorities against pretty much every accepted theory in the world, and as if Bill Nye couldn’t have named a million more scientists who are on his side.

I think the Creation Museum stills comes out of this ahead just because of all the publicity, but last night was a stark reminder that when you’re in a debate against someone who doesn’t even understand the topic of discussion, exposing his limitations may be the best weapon you possess. If anyone was on the fence, they almost certainly didn’t come down on Ham’s side.

Bill Nye may not have won this debate, but Ken Ham sure as hell lost it.