The Nye-Ham Debate Was a Net Win for Science February 5, 2014 Paul Fidalgo

The Nye-Ham Debate Was a Net Win for Science 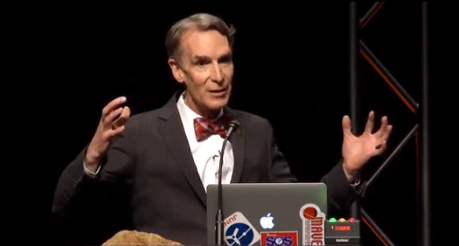 I think the Bill Nye–Ken Ham debate (liveblogged by me and Hemant) turned out to be a net-win for science and reason. I know that many of us in the skepto-atheosphere disagree; that the debate put reality on the same plane as nonsense, or thought that Nye wasn’t up to the task of fully enlightening Ham or his audience. I understand and respect those criticisms, but I think they overlook what Nye really did accomplish.

My definition of success for Nye’s participation in this debate has much more to do with his big public mission to inspire people — especially young people — to become interested in, and friendly to, the process of science and the wonder of scientific investigation. But not as ends in themselves, but in order to improve lives economically, ecologically, and technologically.

Nye was at his best last night when he sincerely expressed his own enthusiasm for the process of science (which he contrasted with Ham’s “historical science” canard) and, in particular, the excitement of not-knowing. Not only did he happily share his own love affair with science and his affection for the Sagan-inspired idea that we humans are “a way for the universe to know itself,” but he also unreservedly and apologetically delighted in the fact that there are still very big questions that we simply don’t have answers to — yet. How wonderful, we can still go and search for that answer!

While I certainly don’t think Nye managed to convince any (or many) Creationists that God didn’t get things started, or that the Bible is a book of fairy tales, I don’t think that he was trying to. Rather, I think Nye’s job was — bit by bit, by dint of his own sincere enthusiasm and love — to introduce small glimmers of doubt, little drops of excitement for exploration, and light one small candle in the darkness of fundamentalist belief, if for even just a handful of Ham’s audience.

Whatever your disposition, Nye is an extremely likable guy, even when his jokes bomb, and I think his strategy, combined with his affability, helped to turn down the temperature on some of the hostility toward science and scientists that many in that audience may have harbored. Maybe by just a few small degrees.

If so, that’s a success. I’d say it’s a big success. Positive change rarely happens in big, fell swoops over the course of one night’s event. But those glimmers that Nye introduced, they might — just might — have some staying power, and may even become infectious. How wonderful would that be?

I’ll grant you, when Nye attempted to explain the Second Law of Thermodynamics, or spent an inordinate amount of time expounding upon rock layers or fish sex, he likely lost the rapt attention of both the in-house and online audience. Fine. Not every minute of Nye’s time was spent successfully putting Ham against the ropes. But that’s more for our own pleasure, anyway. It may also be that this debate raised the profile of the Creation Museum and Ham himself. But so what? So now many more people know how mind-bogglingly wrong he is.

What’s important, I think, is that, just perhaps, one of the kids in that Creation Museum Hall will stop for a moment, and wonder if Ken Ham really is correct about everything, and whether it just might be possible that this old world is older than he says it is.