The United States Air Force Academy has not been a very pleasant place for non-Christian cadets. (It was only this past October when the phrase “So help me God” was made optional in the Honor Oath.)

But there was a major shift in the right direction yesterday when recently-appointed Brigadier General Andy Armacost (below) addressed the entire faculty and told them in no uncertain terms that they could not proselytize while on duty. 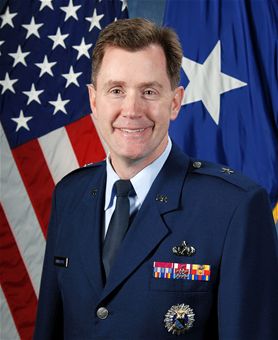 Once faculty member wrote to Mikey Weinstein of the Military Religious Freedom Foundation to explain the details:

Gen Armacost said that we all had an obligation to get to know our cadets and our colleagues and to establish relationships that strengthen our institution BUT, and he said this quite clearly, the instructor should NOT announce their religious belief in class, to people he/she did not know, to people she/he had just met, to people over whom the instructor had a power relationship because no cadet or subordinate should ever have even the slightest concern that his/her religious (or other) personal belief could be a basis for judging them in the classroom — and he added race, sexual orientation, and gender to this, too. I almost gasped in delight.

He then said that everyone had a personal right to practice their personal religion so long as it did not affect their job or mission and that he respected everyone’s personal beliefs. He said that, during the holidays, he greets his friends that he knows are Christian by saying ‘Merry Christmas,’ he says ‘Happy Hanukkah’ to his Jewish friends, and ‘Eid Mubarak’ to his Muslim friends. To the friends he knows are Atheist, he says ‘Have a good break.’ To everyone else whom he doesn’t know so well, he say ‘Happy Holidays’ or something non-sectarian.

THEN, he actually read from AFI1-1 verbatim including the lines about not proselytizing and the importance of the Air Force not showing favoritism or endorsement for one belief system over another. I was almost giddy at this point. FINALLY, someone with the guts to publicly say what’s been documented, signed, and published (if not read aloud) by Air Force leadership. Clear guidance that it’s NOT okay within the military hierarchy to bring your religion (or declare your lack thereof) in the classroom or the department office… Just as clearly, he was separating himself from his predecessor who went so far (according to reports) as tasking one of her senior leaders to conduct a counter-insurgency analysis within the faculty of MRFF supporters, and (earlier in her career) even put her name on a public advertisement in the base paper (with her rank included) declaring the “real” meaning of Christmas and inviting all to the Christian faith.

That’s tremendous news. It’s strange to refer to a call for neutrality and mutual respect as a victory for anybody, but MRFF has kept the pressure on the AFA for years now and this announcement would likely not have occurred without the group’s persistence.

February 5, 2014
Even Pat Robertson Thinks Ken Ham Is an Idiot
Next Post

February 5, 2014 Rod and Todd Flanders' Favorite Board Games
Browse Our Archives
What Are Your Thoughts?leave a comment