You know how all children are exactly like their parents? And if your parents are wicked people, you’ll always end up just like them?

Don’t bother refuting that. It’s too late. Pat Robertson just used a variant of that argument to justify divine genocide.

In response to a woman asking him how a loving God could wipe out entire cities in the Bible (“That sounds like Islam to me”), Robertson explains that God’s just choosing the more merciful path: 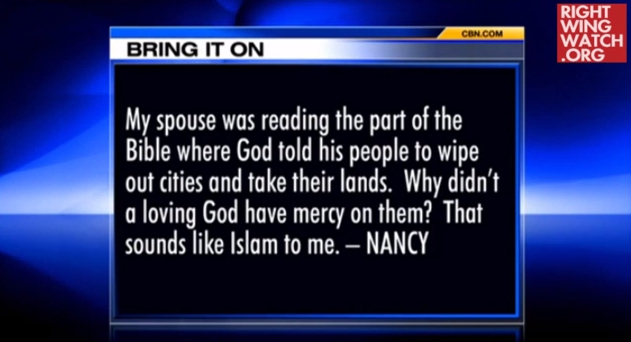 Assuming you have a culture that has 1,000 really bad people in it — they’re murderers, they’re thieves, they’re rapists, they’re having incest, you name it, they are doing everything horrible — now if they have children, what’s going to happen? Instead of having 1,000, you’ll have maybe 3,000 or 4,000; then — nothing has changed them — then they’ll pass it on to the next generation and the next thing you know you’ve got 10,000 or 20,000 of them and if it keeps on going, you’re going to have a million of them. So what’s the most merciful thing for a loving God to do? It’s to take the thousand and get rid of them. And that’s what He did.

Robertson later admits he’s just offering a rationale for an otherwise cruel-sounding idea, but coming up with a rationale for something that awful is precisely the problem we should all have with religion: It gives people bad reasons for believing untrue things.

And if you can justify genocide with the Bible, shouldn’t we be worried about what else you can rationalize?