It’s been a few months since I’ve posted anything from Pastor Steven Anderson, but this one’s worth it.

Anderson’s not at all happy with the new Left Behind movie, so he spent part of a sermon ranting against actor Nicolas Cage, Hollywood, Satan, celebrities, the Left Behind series, and “ungodly wicked whoremongers”: 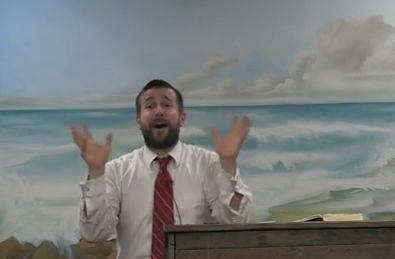 Nicolas Cage has now prostituted himself to liberal Christianity.

You know who’s great? Real live people that don’t work in “Hell-ywood,” that don’t make a bunch of wicked movies, that aren’t ungodly wicked whoremongers, that are just godfearing people who go to church! You know who’s a great person? Plumbers and electricians and carpenters and landscapers and everybody who does an honest living… and not some Hollywood actor!.. The world’s celebrities are of the Devil!… Hey, why don’t we just get excited about the people who actually go to church?!

I guess no one told him that Hollywood employs plumbers, electricians, and carpenters for their sets…

Anyway, this may be the only time you ever hear someone criticizing the Left Behind series for being too “liberal.” Savor it while you can.

February 4, 2014
Why Is This Minnesota Public School Sending Students on a Field Trip to Church?
Next Post