Here’s a question for you: Why would a high school football team’s Twitter feed include a picture of a mass baptism… followed by someone thanking the team’s coach for his faith and leadership? 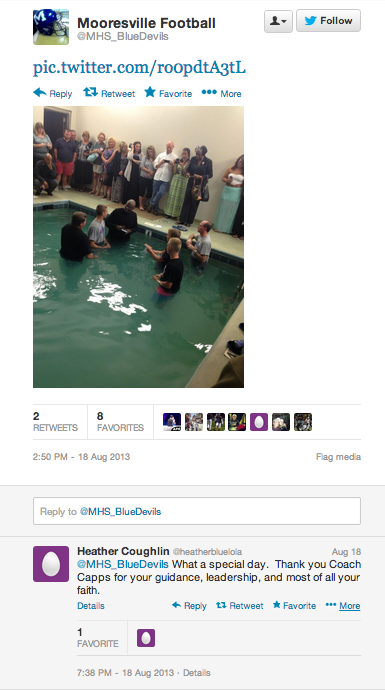 And why would that same coach lead his team in a rally that ends with, “Let’s thank the big guy in the sky”?

Answer: Because Coach Hal Capps of Mooresville High School in North Carolina doesn’t seem to know the difference between church and the workplace.

The Freedom From Religion Foundation sent Capps’ district a letter this past fall informing them that allowing such proselytizing on the football field was prohibited — and it may have done the trick, according to an article published Thursday in the Charlotte Observer:

Superintendent Mark Edwards said Thursday that he met with Capps after the football season and ordered him not to lead students in prayers and baptisms.

Edwards said he told Capps a teacher or coach who leads students in prayer is violating the constitutional separation of church and state. “He said he understood,” Edwards told the Observer.

The foundation wrote the district after it said it received a complaint from a parent of a Mooresville High School student “who objects to religious endorsements” by Capps.

“Students have reported that Coach Capps frequently prays with football players at team events and encourages them to go to church and to become baptized,” the letter says.

Edwards added that the baptism picture in the Twitter feed just happened to involve some of the players and Capps was there at their request, but it wasn’t an official team event. Still, the fact that it appeared on the Twitter feed at all suggests that someone felt it was a team activity. (FFRF’s letter was sent after someone from Capps’ school contacted them.)

What is it about football that always seems to bring out the Christians who don’t know how to keep their faith to themselves…?

Commenters online are quick to point out that Capps is well-respected, but you get the feeling that if he were promoting any faith other than Christianity, they would be getting out the pitchforks right about now.

February 1, 2014 This is Why Elevation Church is the Best Place to Work
Browse Our Archives
What Are Your Thoughts?leave a comment