Teresa of Ávila, a Catholic mystic and Carmelite nun, has been the unofficial patron saint of Spain for some 400 years. She rose to fame in the 16th century when she first began to inflict “various tortures and mortifications of the flesh” upon herself, and then graduated to the imagined penetration by a heavenly seraph, like so:

I saw in his hand a long spear of gold, and at the point there seemed to be a little fire. He appeared to me to be thrusting it at times into my heart, and to pierce my very entrails; when he drew it out, he seemed to draw them out also, and to leave me all on fire with a great love of God.

The pain was so great that it made me moan; and yet so surpassing was the sweetness of this excessive pain, that I could not wish to be rid of it.

These days, I bet she would be a writer for kink.com — or maybe an adviser to the Spanish government. 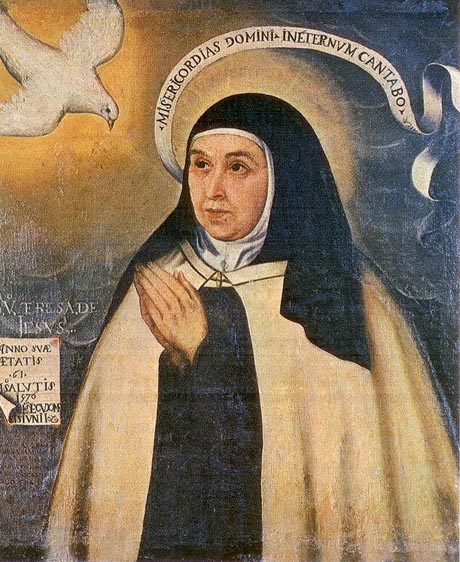 Amaiur, a leftwing party from the Basque country, has put a series of questions to the governing People’s party after the interior minister, Jorge Fernández Diaz, said recently he was certain that Saint Teresa was “making important intercessions” for Spain “during these tough times”.

In a letter to the government on Tuesday, Jon Iñarritu García of Amaiur asked for clarification about what help the government was getting from one of Spain’s most popular holy figures.

“In what ways does the minister of the interior think Saint Teresa of Avila is interceding on behalf of Spain?” he asked. “Does the government believe there are other divine and supernatural interventions affecting the current state of Spain? If so, who are they?“

But Iñarritu García wasn’t done yet. Next up, employment minister Fátima Báñez,

The letter took on a more serious tone in asking about the separation of church and state in Spain. “Does the government believe they are respecting the secular nature of the state?”

As popular as Saint Teresa is in Spain, her veneration also brings back dark memories for some. The Guardian notes that Spain’s fascist dictator General Francisco Franco, as fervently a mass murderer as he was a devout, ostentatious Catholic, had taken quite a shine to Saint Teresa — so much so that “he kept her hand by his bed until his death.”

You read that right, and there’s nothing figure-of-speech about the paper’s statement, according to Listverse:

In February 1937, the future tyrant Francisco Franco acquired the hand of Saint Teresa after it had been stolen from a convent in Ronda. He took the mummified hand wherever he went and even slept with it underneath his pillow. He saw his obsession through to the end as he died clutching it in 1975.

January 31, 2014
Actually, Those Are Five Pretty Good Reasons To Leave Your Church
Next Post