Only Pay Attention To the Part Above the Neckline: Pastor Warns the Ladies Against Looking Sensual January 30, 2014 Terry Firma

Only Pay Attention To the Part Above the Neckline: Pastor Warns the Ladies Against Looking Sensual

Pastor Paul Washer of HeartCry Missionary Society is determined to not let Muslim clerics have all the woman-oppressing fun. Claiming his own piece of the misogyny pie, he’s letting everyone know in a YouTube video that Christian women whose clothes reveal the outline of their body are “sensual” and “wrong,” and that his interpretations of God’s will are “just logic.”

“God is not against beauty. He is against sensuality,” we hear Washer intone. “Your clothing is a frame for your face from which the glory of God is to shine.” 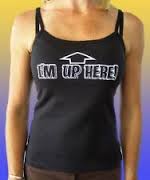 I’m skeptical (wouldn’t you know it). In the 19th century, many men would have gone wild with titillation and lust at the sight of a bare ankle, or a pair of bloomers. Our idea of what’s an appropriate outfit changes over time. It’s logically untenable to claim that there is some eternal, universal standard of dress that the Lord imparted when he created humankind.

I have just as much authority as Washer to say that, if God were real, I can divine his mind (it’s called “using your imagination”). In my universe, the idea that the Creator concerns himself with hemlines and cuts of fabric is nonsense. Clearly, he’s far too busy with things that truly matter, such as crushing little boys to death and helping Peyton Manning score another touchdown.

January 30, 2014
Medical Associations in Scandinavia Want To Stamp Out Ritual Circumcisions. Here's Why I Might Oppose Such a Ban
Next Post