Sam Harris Announces His Next Book; It’s About Spirituality Without Religion

He hinted at it more than a year and a half ago, so it’s about time that The End of Faith author Sam Harris announced his next book.

It’s called Waking Up: A Guide to Spirituality Without Religion (Simon & Schuster), it’ll be released this September, and it’s already available for pre-order.

I love the cover. When you zoom out, you can see the face… 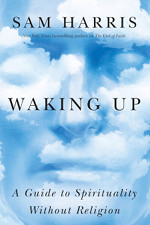 … and when you zoom in, you can see a cloud giving the middle finger to God.

At least, that’s what I assume it is.

As Harris wrote in 2012, the book will deal with issues “like the illusion of the self, the efficacy of practices like meditation, the cultivation of positive mental states, etc.” These are also topics he’s hinted at on his blog and in his previous books.

January 29, 2014
In Scripted Video, Atheist Dentist Challenges Christian Patient. She Very Nearly Converts Him In Under a Minute
Next Post

January 29, 2014 Don't Ever Offend Anyone, Ever, About Anything
Browse Our Archives
What Are Your Thoughts?leave a comment