Got Demons? Have an Exorcism via Skype in the Comfort of Your Home! All Major Credit Cards Accepted January 29, 2014 Terry Firma

Got Demons? Have an Exorcism via Skype in the Comfort of Your Home! All Major Credit Cards Accepted

Bob Larson, a televangelist and the pastor of the Spiritual Freedom Church in Scottsdale, Arizona, wants to rid you of evil spirits. He’s an experienced demon-slayer who says he’s cast out 20,000 of them — but it’s a big job he’ll never finish, because as much as half of the world’s population is possessed. Who knew?

There’s good news, though: If a demon lurks inside you, and you procure Pastor Bob’s services, no need to get up from your La-Z-Boy; you can Skype the demon extractor nowadays. CNN has the story: 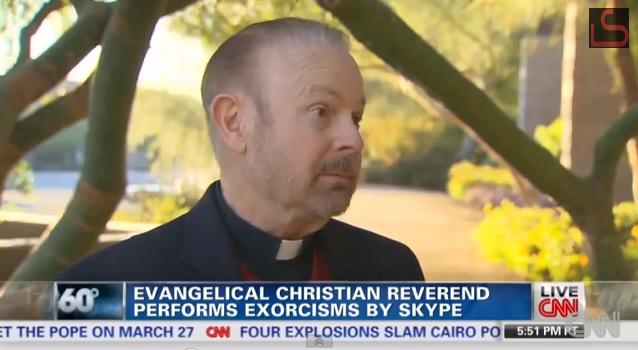 Larson’s website elaborates on the kind offer and explains that the phone is fine, too:

Receive ministry, get your life on track, and experience healing and deliverance at YOUR CONVENIENCE. Bob Larson will personally minister to you, while you sit comfortably in your own home. No plane flights, no expensive gas, no hotel costs.

If you don’t have a computer to Skype your Encounter visually, you can still receive ministry from Bob with a phone Encounter. Call for details.

Not convinced? What are you waiting for? You should realize that

[Bob] has dealt with more demons than anyone on the planet. [Let him] show you how to overcome every obstacle of every day. Stop the cycles of failure, poverty and sickness. Break family curses at the ROOT!

How do you know if you’re possessed, though? Easy. Bob will tell you. Just go to his website and take the Demon Test.

Which is exactly what I did.

Here’s the button on his home page:

“Doing what Jesus did.” I told you you’re in good hands. Now you’re ready to take the test. Just one more click.

Huh. Well, OK, almost there. Click again and this is what you get:

Well, fine. Ten bucks is a small price to pay for making sure that the spawn of Beelzebub hasn’t infested my immortal soul. I went ahead and bought Bob Larson’s Demon Test so you don’t have to, and so we can all have a look at how his ministry operates.

I’m reproducing the questions here as a journalistic service to our current and future readership, to criticize and critique them, as allowed by the Fair Use doctrine that governs international copyright. (If anyone has questions about the Fair Use doctrine, feel free to contact Marc Randazza. He’s a top First Amendment attorney and a friend of mine.) 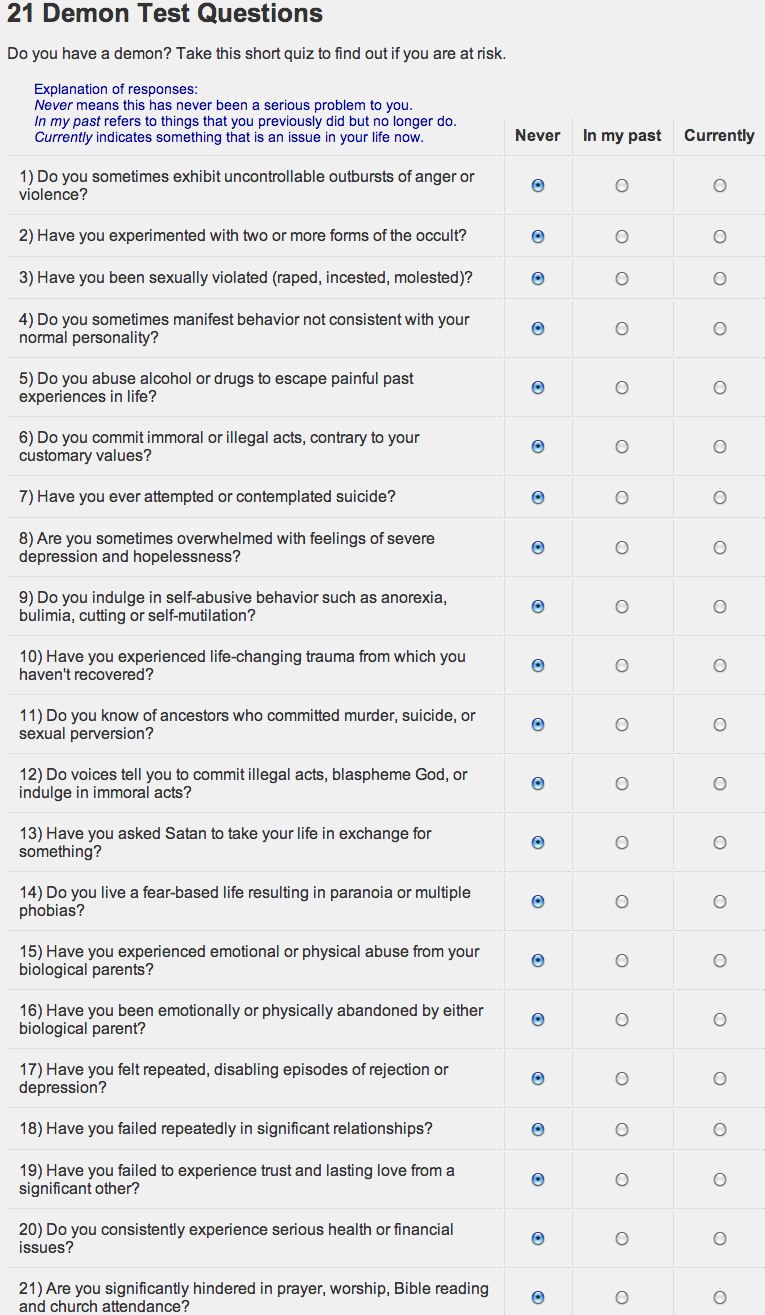 Not wanting to answer everything in the negative (no fun in that), I indicated that I’d once contemplated offing myself (question 7) and that I had “repeatedly failed in significant relationships” (question 18).

Fortunately, my results confirmed that I’m probably not hosting evil spirits — or, as Pastor Bob put it, “You are at low risk for demonic oppression/possession.”

Or maybe not. My healthy score notwithstanding, Reverend Larson urgently recommended three products that “address every area of each individual’s emotional wounding, spiritual vulnerability, and potential demonization.” To wit: a seven-hour DVD production called Do You Have a Demon?; a 500-page “encyclopedic handbook” called Larson’s Book of Spiritual Warfare; and another tome of almost 600 pages called Larson’s Book of World Religions & Alternative Spirituality. All three can be purchased for the low, low price of — I don’t know actually, because that part of Larson’s web shop didn’t seem to be working when I tried.

That should sting Pastor Bob, because he does love money.

In the recent past, according to skeptic and science journalist Karen Stollznow,

Larson tour[ed] the country with his “free” seminar; a relentless four-hour brainwashing ritual. Like selling spiritual time-shares, he wears down his victims with his high-pressure sell until they donate, buy a book, a DVD, a $495 one-on-one audience, or a course to become an exorcist.

Stollznow offers a heartbreaking eye-witness account of how Larson treated a girl who should have perhaps been in a hospital instead of at a glorified tent revival:

Larson swooped in on an 18-year-old girl. She had been pregnant until she miscarried her baby… the day before. The lifeless fetus was still in her body. Instead of the doctor’s or counselor’s office, the girl had been dragged along to Larson’s seminar by her father, to ‘explain’ the cause of her miscarriage. Married at 16, perhaps this wasn’t her first miscarriage. She thought she was cursed.

Larson’s obvious diagnosis was that she was possessed by a demon.

“Jezebel,” she replied, coached by the film shown earlier in which this demon had been named.

“You killed the baby, didn’t you?”

“I killed the baby!”

At this she had clearly admitted that she hadn’t wanted to be pregnant in the first place, as few teenagers do, but Larson overlooked her psychological admission for a psychical one.

Larson proceeded to jab her with his crucifix and Bible, invoking Jesus to drive out her demons. Then he really showed his messiah complex…he tried to bring her baby back to life…

He prayed over her, asking the Holy Spirit to “start that heart beating again.” Through the cacophony of crying, chanting and praising God, few heard Larson’s mutter his disclaimer/admission, “Unless it’s God’s will that this not happen”.

Oddly enough, resurrecting the young woman’s dead fetus wasn’t on God’s calendar that day, or on any subsequent day.

Larson will turn 70 this spring. He’s got unlikely successors waiting in the wings: his teenage daughter Brynne and her two friends, Tess and Savannah Sherkenback. We previously wrote about the darling trio here.

The four of them went on a exorcism tour of rural Ukraine last year. What ensued was captured on camera by a team from Vice. The footage is disturbing in many ways — the devil-challengers’ camera-conscious showmanship and obvious craving for celebrity; the ditzy girls’ Christ-based one-size-fits-all solution to severe problems they’ve made no effort to understand, like drug addiction and child abuse; and the audience’s assumption that the catharsis offered by a few minutes of screaming and crying is proof of some supernatural victory over evil.

Fair warning: Although it’s a mind-bending production you shouldn’t miss, you’ll lose a little bit of faith in humanity when you watch it.

January 29, 2014
11 Tips for Bill Nye Before His Debate Against Creationist Ken Ham
Next Post