We’re not even in February, but I think this is a potential winner in the category “Bizarre Whodunnit of the Year”:

Thieves broke into a small church in the mountains east of Rome over the weekend and stole a reliquary with the blood of the late Pope John Paul II, a custodian said on Monday.

Dozens of police with sniffer dogs scoured the remote area for clues to what the Italian Catholic magazine Famiglia Cristiana called “a sacrilegious theft that was probably commissioned by someone”.

Franca Corrieri told Reuters she had discovered a broken window early on Sunday morning and had called the police. When they entered the small stone church they found the gold reliquary and a crucifix missing.

One of Christianity’s more unsettling practices is the veneration Catholics have for the body parts — and bodily fluids — of their purported saints.

Nothing is too ghoulish to turn into a religious object. Jesus’s foreskin. The finger of Doubting Thomas (the one he poked into the gash in Christ’s side). The breast milk of the Virgin Mary. The thumb and head of St. Catherine of Siena. St. Fiacre‘s semen-encrusted sock.

OK, I made that last one up, but is it really any crazier than the preceding relics? 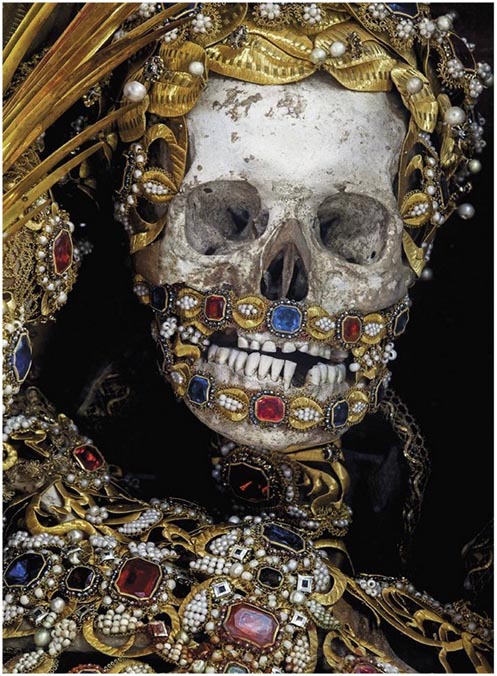 Oh, also, shrines and churches all over Europe used to display — until it became embarrassing, and the custom died out — entire skeletons of exemplary Catholics known as catacomb saints, decked out postmortem in brocade, gold, rubies, pearls, and emeralds. The faithful could come gawp at the jewelry-bedecked bony cadavers “as reminders … of the heavenly treasures that awaited them after death.” The photo above shows one of the remaining catacomb saints. It was taken by Paul Koudounaris, who literally wrote the book on the subject.

Anyway, saintly blood has long been a relic too, and that grisly tradition continues.

In 2011, John Paul’s former private secretary, Cardinal Stanislaw Dziwisz, now archbishop of Krakow in Poland, gave the local Abruzzo community some of the late pontiff’s blood as a token of the love he had felt for the mountainous area.

I dare say we’ve all done that with people we held dear. We exsanguinate them and distribute their blood in little bottles as a sign of respect. It’s only right.

It was put in a gold and glass circular case and kept in a niche of the small mountain church of San Pietro della Ienca, near the city of L’Aquila.

Corrieri, who is part of an association that looks after the small church, said the incident felt more like a “kidnapping” than a theft. “In a sense, a person has been stolen,” she said by telephone.

She said she could not say if the intention of the thieves may have been to seek a ransom for the blood.

Thefts of relics are not uncommon, starting with the Holy Prepuce (that’s Jesus’s foreskin) and ending — for now — with the blood of Pope John Paul II. The Telegraph reports an earlier embezzlement of the pontiff’s claret:

In Aug 2012, another relic containing a vial of the late Pope’s blood was stolen from a Catholic priest while he was travelling on a train north of Rome.

As far as we know, no Satanists were involved in that blood crime, but Giovanni Panunzio, who represents an anti-occult group called Osservatorio Antiplagio, fears this time may be different:

“It’s possible that there could be Satanic sects behind the theft of the reliquary.”

January 28, 2014 After Being Cancelled by Christian Politicians in Northern Ireland, Satirical Bible Play is Back On and Sold Out
Browse Our Archives
What Are Your Thoughts?leave a comment