Another Parent Decides to Perform a Violent Exorcism on a Child. Are You Losing Count Yet? January 25, 2014 Terry Firma

Another Parent Decides to Perform a Violent Exorcism on a Child. Are You Losing Count Yet?

Could be coincidence, or selective perception, but I’ve come across more reports of violent, usually fatal exorcisms in the past few months than I had in years.

Consider just the ones I recently wrote about:

I don’t even have a Google Alert for “exorcism” or “demons.” These are just stories I came across in my daily browsing.

Bryan Adams, 31, allegedly brought his 11-year-old son to the woods Jan. 16 to perform an exorcism on him, according to Okeechobee County Sheriff’s deputies. 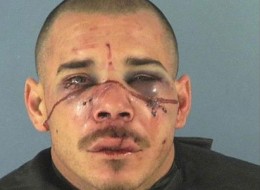 “You are the demon and you know what I must do with you,” Adams told the boy, according to a police report obtained by WPBF.

As was the case with Zakieya Latrice Avery, the Maryland woman who stabbed her four children this week, external factors greatly exacerbated the religious delusion of the “possession” narrative. In Avery’s case, it was mental illness. In Adams’, it was meth abuse:

Police officers arrived just in time to rescue the boy; he suffered only a minor injury to the back of his foot.