Just when you thought the previous amazing Christian horror film, The Lock In, couldn’t possibly be topped, here come the Cheys.

Writer/director Tim Chey and producer Susan Chey are a married couple whose movie, Final: The Rapture, which is in (a couple of) theaters now, was made for “less than 10 million dollars” (note budgetary wiggle room). It was reportedly shot in six countries over five months. 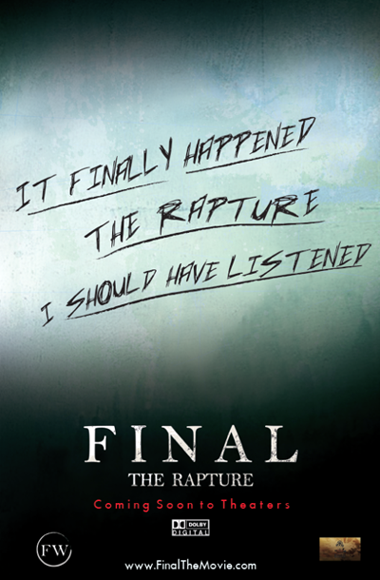 In an interview this week with the Orlando Sentinel, the makers explain their cinematic and marketing strategy.

“It’s a Christian horror movie,” said director-writer Tim Chey, who adapted his novel ‘Final.’ “The Christian community loves the film because they believe in the Book of Revelation, when Christ returns. Atheists love the film from a horror standpoint.”

Ah, but watch out everyone: the horror is just a clever trap to drive us into the arms of the Savior. A bit of Trojan horseplay, if you will.

Susan Chey … described the film as “like the Trojan horse,” because the goal is to get people to see ‘Final,’ then think about their lives. “We’re trying to share this so their eyes will be opened.”

(Perhaps Susan momentarily forgot that the first freakin’ rule of Trojan Horse is you don’t talk about Trojan Horse.)

The Christian Post claims that Final: The Rapture is being heralded as the “scariest Christian movie of the decade,” though it doesn’t say who’s doing the heralding. The Guardian is less impressed, faulting the flick for “terrible dialogue and cheap effects,” though my impression is that the film is easily as good as anything Ed Wood has ever done.

Here’s the trailer. See for yourself.

Scared yet? Or converted? OK, maybe you need to see the whole film. And if, after that, you hunger for more, the Cheys intend to oblige:

Tim Chey said he hoped ‘Final’ will be the first in a seven-film series. …

“In Hollywood, they’re running out of stories,” Susan Chey said. “They recycle. But we’ll have stories until Jesus comes.”

So be prepared to get scared. And goosebumpy. Oh, and bring a tissue. Warns the director in a press release:

“It was one of the best received films I’ve done. A lot of people told me later they cried at several scenes.”

A fan named Carry1, writing at Fandango.com, says she was among those whose tear ducts worked overtime.

“I was invited to preview this movie and took my family with me. Even my youngest son, who is 4, came home reciting the message of the film. If a four year old gets it, I am thrilled to think of how many lives could be changed by going to see it. My children laughed at me because I cried like a baby. It evoked so many different emotions! It has been a long time since a movie has touched me like this film did.”

Final: The Rapture is a PG-13 movie, by the way, but it’s only fair that the need to instill the fear of God in unsuspecting toddlers trumps any concern over subjecting them to a horror film that shows — in Tim Chey’s words — “life, blood, shootings, murder.”

By the way, make sure that at your next church rapture movie night (I know how you love those), they show the Cheys’ film, instead of this Lionsgate impostor called Rapture-Palooza. The latter is a secular mockery that Jesus will surely burn every copy of just as soon as he finally gallops back down to Earth on his white horse.

January 24, 2014
These Cleverly-Designed Billboards Would Preach the Bible Right Back at Christians
Next Post