After Christian Politicians in Northern Ireland Force Cancellation of Satirical Bible Play, the Backlash is Fierce

Remember how the Mormon Church responded when The Book of Mormon musical came out? They embraced it (without quite endorsing it), placed ads in the Playbill, and even issued a well-crafted public statement:

The production may attempt to entertain audiences for an evening, but the Book of Mormon as a volume of scripture will change people’s lives forever by bringing them closer to Christ.

So when a theater company in Northern Ireland wanted to perform a comedy called “The Bible: The Complete Word Of God (abridged)” — a show that pastors have long-enjoyed as it’s a satirical look at a subject near and dear to their hearts — you would expect the reactions to be along the same lines.

Instead, politicians there demanded the cancellation of the show because they believed it was too blasphemous:

Newtownabbey councillor Billy Ball claims the play makes a mockery of the Bible and Christianity.

“This is supposed to be a Christian nation and we are allowing the Bible to be mocked and slated,” he said. “Our parliaments are sworn under it, the courts offer an oath on the Bible, if that’s your religious choice.

“Christians can be slagged for their beliefs and I can take that, I don’t mind that, but when it comes to the Bible that’s different, it’s sacred.”

And as we all know, nothing that is sacred to anyone can ever be mocked! Well, guess what? Freedom of speech is sacred to me, and Ball’s call for censorship is far more offensive to me than anything this acting troupe is doing to the Bible.

Unfortunately, his tactic worked. Evangelical Christians in the nation’s Democratic Unionist Party (DUP) pressured the theater into canceling the production:

… the show has been pulled from the schedule at the theatre, which is run by unionist-dominated Newtownabbey Borough Council.

The council issued a statement on Thursday, saying the artistic board had, “with great regret”, taken the decision to cancel the play.

It added: “In taking this decision, the board wishes to confirm its commitment to deliver on the agreed council’s artistic policy ‘to deliver the highest quality performing arts programme, offering a diverse, socially relevant and enriching experience to as many citizens as possible’.”

Now that the show has been axed, may I suggest an alternative to the troupe? Show up at a local Belfast theater on the nights the show was supposed to be performed and just mock Christians instead of the Bible. Call it “This Is What Billy Ball Wanted Us To Do.”

Just to be clear, the show will continue at other venues in the UK — just not the two shows that were supposed to go on at the Theatre at The Mill.

There’s one bright side to all this: The backlash has been incredible and the politicians are getting trashed in the media: 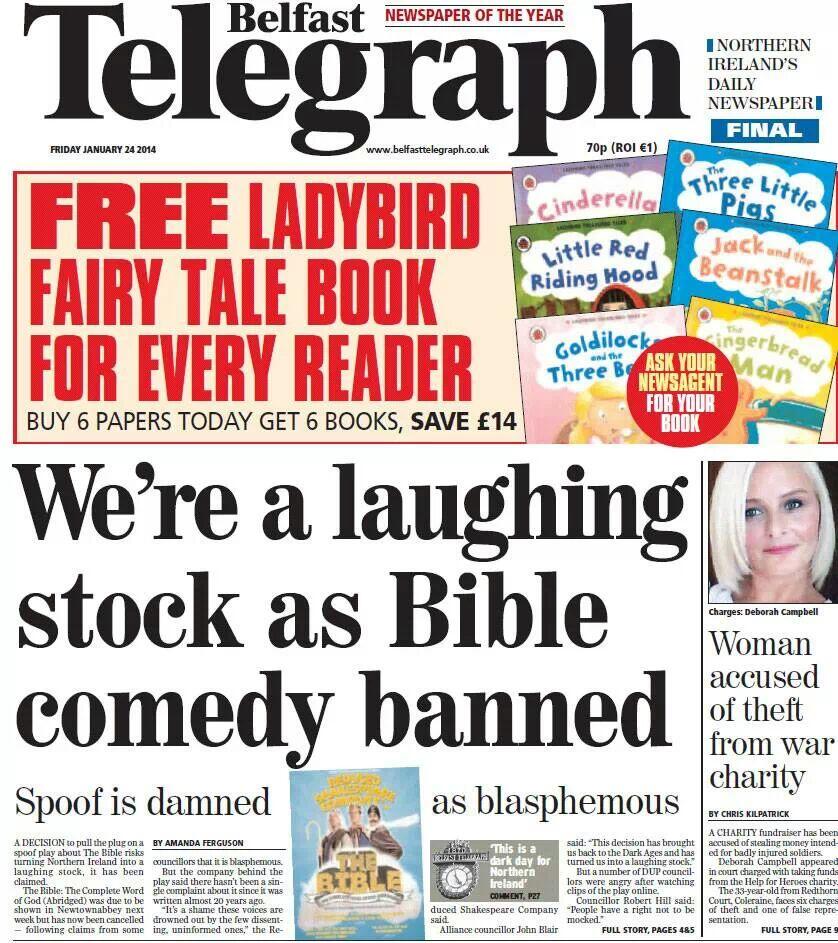 Even the hashtag #ThouShaltNotLaugh is gaining traction on Twitter:

#ThouShaltNotLaugh @reduced @BelTel Pols have little faith in their constituents' Faith if they think 90 min. of comedy will destroy it.

Even those involved with the production are pushing back:

But the theatre group behind the production pointed out that they had taken the show to Jerusalem recently and had had no problems staging it, nor were there any protests from the Israeli authorities.

Before the cancellation on Thursday, Dave Naylor, the play’s producer, had said: “Maybe Councillor Ball should come and see our show before denouncing it as unholy. But he’d better be quick as all his comments have done is increase ticket sales.”

Let’s hope this inspires even more blasphemous productions to be staged in the area. There’s definitely an audience for them.

(Thanks to Andy for the link!)

January 24, 2014
Of All The Ways to Respond After Walking in on Your Roommate Pleasuring Himself, This One Never Crossed My Mind
Next Post

January 24, 2014 Michigan State Senator Introduces Legislation to Make 'Under God' a Permanent Fixture in the Pledge of Allegiance
Browse Our Archives
What Are Your Thoughts?leave a comment