Ernie Chambers is arguably the highest-ranking openly-atheist politician in the country right now. The African-American Nebraska State Senator served for 38 years (beginning in 1970), making him the longest-serving senator in the state’s history, until he was term-limited out in 2008. When he was eligible to run again in 2012, he did so and won easily. 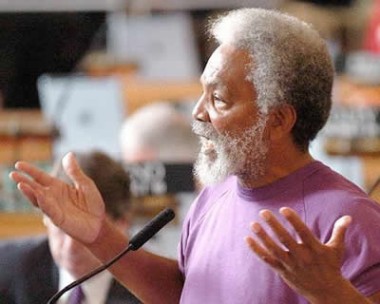 And now he has introduced a bill, LB675, that would eliminate a state property-tax exemption for religious organizations — essentially taxing churches.

The bill itself is a riot because all Chambers does is cross out the word “religious” from the current list of groups that are exempt from paying property taxes:

Chambers’ Statement of Intent for the legislation is also the best thing you’ll read all day:

The purpose of LB 675 is to help the State gain more revenue, rather than less, by taking away churches’ property tax exemptions.

The Governor and candidates for governor have said that “everything should be on the table.” If taxes were paid on the many churches and cathedrals and temples in every city in this State, perhaps the State’s assistance to local governments and schools would be diminished considerably — leaving more in State coffers for other purposes.

Religious people say they want to carry out the directives of Jesus who said, “Render unto Caesar what is Caesar’s,” when he was asked whether taxes should be paid to Caesar.

In short: “PAY YOUR TAXES.”

This bill simply carries out what Jesus wanted to see his followers do, and they certainly want to see the Scriptures fulfilled.

As quoted the Lincoln Journal Star January 9, 2014: “Every day that someone offers a prayer in the Legislature, it should [signal] another vote for LB 675.

“This should be one of the easiest bills to pass that I’ve offered in the Legislature.”

Jesus knew about, and understood, taxes because his disciple, Matthew, heeded Jesus’ call to leave his place at the tax-gatherer’s booth and follow him.

All things considered, I expect my legislative colleagues to say, regarding this bill: “Let Thy will be done.” To which I can intone: “Amen.”

Of course, the bill has a snowball’s chance in hell of getting anywhere:

The measure is unlikely to advance out of committee. But Chambers says he may attach it as an amendment to other bills he opposes.

If enough politicians did this, it would have to pass somewhere, right…?

This isn’t Chambers’ first public battle against religion. In 2007, he famously sued God just to make a statement. Last year, during a filibuster, he remarked that the Mafia has higher standards than the Catholic Church hierarchy because if their members were “raping children, they’d off them.” And last March, he expertly took down an “ex-gay” man as well as a Christian psychologist making arguments against pro-LGBT legislation.