Diocese Knew Priest Russell Romano Was a Pedophile; Didn’t Turn Him In Because ‘We Don’t Want To Be Snitches’ January 23, 2014 Terry Firma

Diocese Knew Priest Russell Romano Was a Pedophile; Didn’t Turn Him In Because ‘We Don’t Want To Be Snitches’

Russell Romano, a longtime Illinois clergyman who left the active priesthood in 1991, is thought to have sexually abused more than a dozen boys in his heyday. As recently released records show (with the Catholic Church, there are always recently released records that astonish, despite everything we’ve already learned), church officials were perfectly clear about what Romano did.

The Chicago Sun-Times recounts how at Quigley Preparatory Seminary, where Romano worked, Rector Rev. John Klein stated in writing in 1985 that he knew his employee “liked the boys.”

When he confronted Romano about his habit of kissing and hugging boys, serving them alcohol and showing them pornography, “Russ immediately and without hesitation admitted that these (actions) showed poor judgement and they would stop immediately — that sincerely I should never worry about him doing any of this again.” 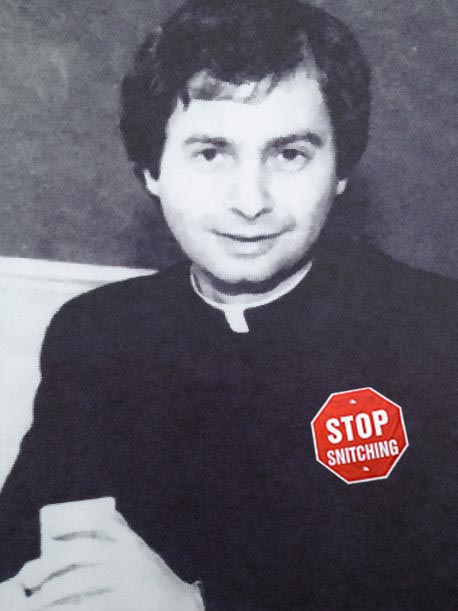 Next, Klein offered words of praise for the priest’s “sincerity” and his brave admission about his “judgement” problems.

I thanked him for his quick recognition of this, and he really seemed sincere — as if it had been something he had been thinking about and realizing was not too wise,” Klein wrote.

“Russ needs to be supported and loved as he tries to work on things; he appears to really be trying hard.”

Isn’t that precious. Note that Klein didn’t say that the children Romano diddled needed to be supported. Or that the padres should “really be trying hard” to secure justice for the victims. Going by the records, those weren’t even secondary concerns. Just non-existent ones. Because when Klein thought about what he should do if someone ever complained about Romano’s rapey routine, he swiftly decided that

“We don’t want to be snitches.“

… the priest was quietly ordered by the archdiocese to stay away from children.

And that was it. Romano was never prosecuted.

No secular janitor or engineer could have gotten away with repeated sexual child abuse if such behavior was known to colleagues and superiors. But a priest? A representative of God on Earth, ensconced in a Church that imagined itself to be above the plebeian law? Different story, apparently.

January 23, 2014 When Did Craters Appear on the Moon? Creationists Now Have an Answer: Day 4 of Creation Week
Browse Our Archives
What Are Your Thoughts?leave a comment