It’s impossible, in this space, to do justice to the breadth and depth of religious insanity that writer Jeff Tietz chronicles in this riveting 9,300-word Rolling Stone story. But in a nutshell, the piece is about the suicide — perhaps the murder — of a 27-year-old writer and nurse named Bethany Deaton, who had been married just a couple of months when her body was found in October of 2012. She had been suffocated by a white plastic bag tied under her chin.

Tietz’s article, from which I’ll quote below to give you a flavor, explores the disturbing social dynamic in a group (make that a cult) of about 20-25 young people, mostly college students, associated with the International House of Prayer (IHOP) in Kansas City, Missouri. The group’s leader was Tyler Deaton (pictured below) — “tall, handsome, haughty and effeminate” — who’d married Bethany despite the strong same-sex attractions he’d felt all his life. 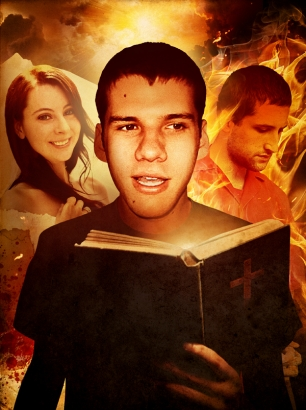 Tyler, full of charisma and likability that tended to veil his grandiose self-image and manipulative tendencies, held great sway over his followers. He sometimes decided on a whim who would room with whom in the Kansas City house that the men shared (the women had their own place, four miles across town). After Bethany’s death,

Under questioning by detectives, two of the men in the house, and one who had recently moved out, revealed that they were in ongoing “sexual relationship[s]” with Tyler. At least one of these relationships was “long-term.” A fourth said that Tyler had “groomed” him to be part of their sexual group.

Deaton’s relationship with Bethany [had] remained as it was: a weekly three-hour school-night date and bread baking on Fridays.

God ordained this: the gay sex was purely spiritual, in service to the Almighty, Tyler always insisted. According to Boze Herrington, a one-time follower of Deaton’s,

“It was a skillfully orchestrated system of debauchery that shattered the wills of the boys under Tyler’s care and crushed their spirits.”

True to IHOP theology, all the members of Tyler’s prayer group were convinced that

… they are “in the early days of the generation in which Jesus returns,” as IHOP founder Mike Bickle puts it. “I believe that people alive on the Earth today will actually see the Lord with their own eyes,” he has preached. But Jesus has no clear return path. Demons, he says, have steadily taken possession of Christian hearts and infiltrated earthly institutions. …

Bickle believes that unceasing, euphoric worship and song at IHOP and in prayer rooms across the globe, which should never close or be empty, will promote passionate intimacy with the Lord, revive the church and demolish demonic strongholds. And so IHOPers pray all day and night, through blizzards and blackouts, in hours-long sessions of mesmeric, musical worship, repeating the same phrases over and over, expecting to precipitate the Great Tribulation and the final battle between good and evil that precedes the Second Coming of Jesus Christ. 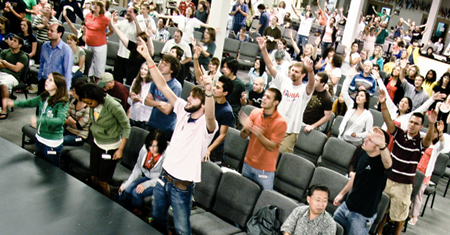 One day, an immense dark cloud appeared over a stretch of highway close to where the young men men lived. They decided on instinct “that God was about to descend … in glory and judgment and … destroy these things that were against him,” in Herrington’s words.

The next day, a student named Rob Atkinson was crossing the stretch of Highway 29 earlier darkened by the premonitory cloud when he was hit by a car and killed. Atkinson had been a vocal supporter of interfaith dialogues, which [Tyler] Dea­ton considered harbingers of the Antichrist. “We were convinced that God had come down in wrath, and that our prayers had led to this student’s death,” Herrington later wrote to a friend. Several others concurred.

The worship-group members believed they had blood on their hands, and it exalted them. “We talked about Rob in a tone of gleeful triumphalism,” Herrington says.

… Deaton began preparing the group for the End Times. They stockpiled a month’s supply of food in the women’s house and met twice a week with a guy who was reputedly a former soldier to practice dodging imaginary bullets, wrestling weapons from enemy soldiers and executing combat rolls by leaping from playground slide platforms and monkey bars. The training would pay off when the Antichrist upended existence. Deaton also told them that if they made it to the Middle East first, they would be able to fend off Muslim extremists.

But before anything resembling such a bizarre scenario played out, the group broke apart, 15 months ago, after Bethany Deaton’s body was found.

Tyler has not been charged with anything, although some of his erstwhile religious friends, according to Tietz, believe he is at least partially culpable in her death.

Nine days after the suspicious suicide, a friend of Bethany and Tyler’s named Micah Moore went to the police and confessed to having suffocated the young woman.

He had done so, he claimed, on Tyler’s orders. Over the past few months, Moore told a detective, Bethany had been dosed with the anti-psychotic Seroquel, and he and several men in the house had been sexually assaulting her. They had begun to worry that she might tell someone about it.

Two weeks later, Moore recanted his confession, but the D.A.’s staff believed they had their man and charged him anyway. Micah Moore will stand trial this fall. For now, both he and Tyler Deaton should be considered innocent.

If you’ve ever read Donna Tartt‘s spellbinding first novel, The Secret History (highly recommended), the resemblances are legion. In Tartt’s book, a close-knit group of exceedingly smart college kids, some with fractured identities, jockey for influence and status, ultimately leading to the brutal murder of one in their midst.

Tietz’s Rolling Stone account, though a true story, somehow seems more fantastical and surreal — as you might expect when you throw drugs, group rape, and a particularly insane brand of religiosity into the mix.

January 22, 2014 Arizona School District Votes to Reinstate Prayer at Board Meetings
Browse Our Archives
What Are Your Thoughts?leave a comment