Churches are not supposed to engage in party politics if they want to continue to claim the tax-exempt status that costs Americans roughly $71,000,000,000 a year.

That means you can’t legally run an invitation like this in your church bulletin: 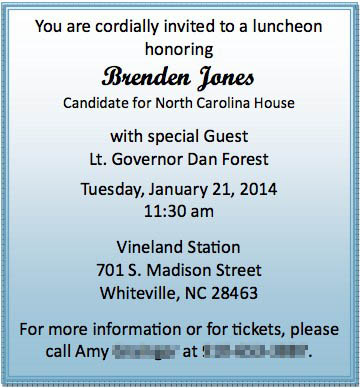 No doubt, that’s a political event. In fact, it’s an out-and-out fundraiser, with tickets costing anywhere from $25 to $4,000. Brenden Jones, by the way, is a deacon at Tabor City Baptist Church in North Carolina, which happened to issue the publication in which this ad appeared. As you can see, Jones is now running for the State House of Representatives (as a Republican). Lt. Governor Dan Forest, who endorses Jones, is a Republican as well.

But no worries: Bruce Schmidt, the pastor of Tabor City Baptist, says it all has nothing to do with party politics.

“We are honored to pray for and acknowledge our leaders, Democrat or Republican. We are not giving an endorsement as a church. Which we’re prohibited to do as a tax exempt organization. But we feel like it’s very very important to give acknowledgement and encourage people to pray and do their civic duty and step up and be involved in the political process.”

If you’re an average-to-good reader of body language and facial expressions, watch the pastor make his case in this video, starting at 0:57. What do you see?

January 22, 2014
The (Animated) Story of Sodom and Gomorrah
Next Post