Witchcraft is prohibited by Islam. Indonesian President Susilo Bambang Yudhoyono‘s government wants that encoded in law with a clause specifying that the use of black magic to cause “someone’s illness, death, mental or physical suffering” is a crime punishable by five years in jail and a $25,000 fine.

Good idea. If it wasn’t for such legislation, presumably everyone would be terrified 24/7 due to witchy things like this event, described in Yudhoyono’s new autobiography.

“Suddenly, my wife screamed,” writes Yudhoyono in the 900-page book, “Selalu Ada Pilihan” (There is Always a Choice). “There was this thick dark cloud hovering beneath the ceiling, trying to enter my bedroom. I then asked everybody to pray to seek Allah’s help. I closed the door to my room but left others wide open. The revolving clouds eventually headed out of my house.” 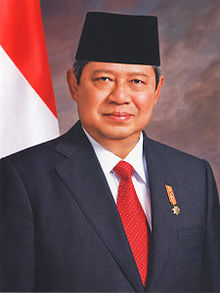 Could’ve been a smokey kitchen oven I suppose, or a dream, or a vision brought on by food poisoning or an adverse drug reaction.

Witchcraft? Doesn’t such nonsense damage the president’s reputation? Hardly. He doesn’t have to worry about a dent in his political capital, as he is at the end of his second and last presidential term anyway. Besides, 7 in 10 Indonesians think you’re a weirdo if you don’t believe in witches. According to Religion News Service,

A 2012 survey by the Pew Forum showed that 69 percent of Indonesian Muslims believe witchcraft is real. “Many people in Indonesia, including its top leaders, turn to soothsayers to consult about their careers, fortunes and marriages,” said Endy Bayuni, senior editor at the Jakarta Post.

Wikileaks revealed that Yudhoyono skipped a U.N. meeting in 2010 because the 19th-century presidential palace in the capital Jakarta was rumored to be plagued by acute and “rampant witchcraft.”