New Study Finds That Divorce Rates Are Higher in Counties with a Greater Concentration of Conservative Christians January 19, 2014 Hemant Mehta

Given that religious conservatives look down upon divorce and fight against LGBT rights in part to protect what they call the “sanctity of marriage,” you would think their rates of divorce would be pretty low.

But a new study scheduled to be published in an upcoming edition of the American Journal of Sociology suggests otherwise:

Demographers Jennifer Glass at the University of Texas and Philip Levchak at the University of Iowa looked at the entire map of the United States, going county by county, to examine where divorces occurred in 2000 and what the characteristics of those counties were. Their work confirms that one of the strongest factors predicting divorce rates (per 1000 married couples) is the concentration of conservative or evangelical Protestants in that county. 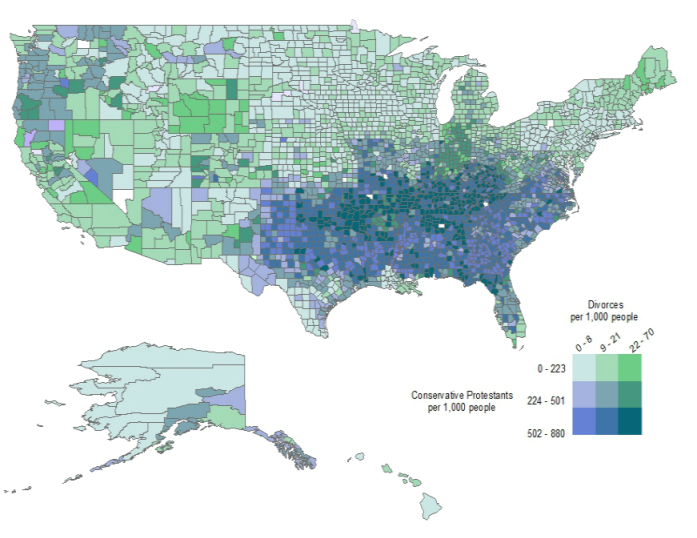 Not only do conservatives Christians have higher divorce rates, people around them — including non-religious people — are likely to absorb a lot of that culture and then become prone to divorce as well:

Glass and Levchak believe that this comes from living in a cultural climate where most people expect to marry young and there is little support from schools or community institutions for young people to get more education and postpone marriage and children.

It’s important to note this study controlled for things like income and region. So even when you remove those elements, the higher divorce rates are “explained in large part by the earlier ages at first marriage and first birth, and the lower educational attainment and lower incomes of conservative Protestant youth.”

It makes sense, even without the mathematical evidence to back it up. If you get married young (because you can only have sex when you’re married) and throw kids (stressors) into the mix, all before you’ve had a chance to establish a career, your relationship is going to have a lot of strain on it. If you live in an area where getting married young and having kids early is commonplace, the pressure is on you to just go with the flow.

Remember that when someone says religion benefits society.

January 19, 2014 It's a Miracle! Catholic Nun Gives Birth!
Browse Our Archives
What Are Your Thoughts?leave a comment