A nun originally from El Salvador and working in Italy went to the hospital earlier this week complaining of stomach cramps, only to give birth to a child hours later: 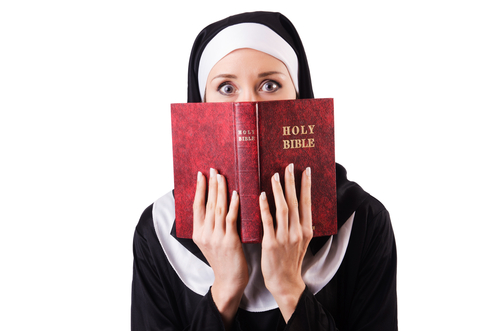 “I did not know I was pregnant. I only felt a stomach pain,” Italian news agency ANSA quoted her as saying.

It appears the child was conceived during a trip back home last year — cue a joke about “indulgences” — though the nun hasn’t admitted to any sin. But there’s a major upside to the birth:

“It would be preferable that she now lead a secular life with her baby, away from religious institutions,” said a spokesman for Delio Lucarelli, bishop of Rieti.

She has nothing to be ashamed about. Celibacy and the forced childlessness that comes with it are fine if that’s what you really want — but this nun clearly didn’t want that, and now she’s getting her ticket out of the convent. It’ll be awkward for a little while, but I want to believe she’ll be thrilled about her (forced) decision before long.

On a side note, anyone else find it incredible how there was no cover-up here? This nun broke the Church rules, there was evidence of it, and she was immediately out of a job. But there are plenty of examples of priests breaking the (actual) law, with evidence of their crimes, and they just got moved to a different parish. The nun hurt nobody.

Assuming she got pregnant through her own conscious actions, I would love to see the media focus, not on her denial of being pregnant, but on the delusional religious mindset that some people should refrain from sex for life because God wants it that way.

January 19, 2014
New Study Finds That Divorce Rates Are Higher in Counties with a Greater Concentration of Conservative Christians
Next Post

January 19, 2014 This Would Have Been a Great Article About Coming Out as an Atheist... a Couple of Decades Ago
Browse Our Archives
What Are Your Thoughts?leave a comment