The Pastor Who Delivered a One-Minute Sermon So He Could Watch Football Was Just Kidding January 16, 2014 Hemant Mehta

Gold Hill Lutheran Church Pastor Tim Christensen decided to play a joke on his congregation last weekend — but he didn’t know it would go this viral: 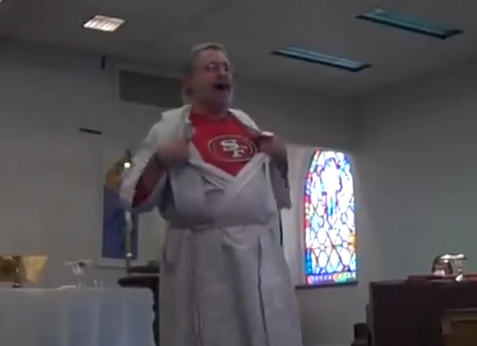 “Would you all like to be forgiven for your sins?” Pastor Christensen asks his congregation right out of the gate on the video.

“OK. That’s great. You are,” he quickly blessed.

What about the playoff game?

“We had the game on DVR, so later our whole family went on a self-imposed media blackout, which is just like the opposite of what today is.”

Not that I’m complaining, by the way. The prank was hilarious and the pastor has a good sense of humor about all this. But I’ve seen way too many religious commenters online and on YouTube complaining about the “sacrilegious” action by the pastor to just let it go unexplained.

So whenever someone posts this video online, remind them that it’s just a hoax, a pastor having some fun with his congregation.

January 16, 2014
An Atheist's Deal for Anyone Who Wants to Preach to Him
Next Post

January 16, 2014 Pastor Mark Driscoll: Wanna Date My Daughter? Show Me Your Browser History
Browse Our Archives
What Are Your Thoughts?leave a comment