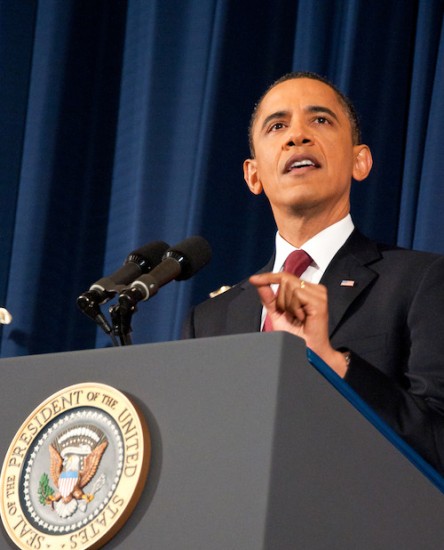 After President Obama gave a shout-out to “nonbelievers” in his first inaugural address in 2009, atheists have felt a little bit out in the cold with our president. His record on ending discrimination in hiring within faith-based initiatives has been disappointing to nonexistent. His participation in the National Prayer Breakfast events has been galling and frustrating. And in a major Supreme Court case, his decision to side with unconstitutional sectarian prayer at government functions has been enough to make a secularist throw up his or her hands in exasperated disgust.

So actions speak louder than words, but words can also be incredibly important and powerful. Secularists were moved and heartened by the president’s declaration to the United Nations in 2012 that “we do not ban blasphemy,” for example, drawing a crucial moral line across the world stage. We nonbelievers were not named, but it is our worldview, our dissent, that is so often the focus of crackdowns on free expression and belief.

Today is Religious Freedom Day in the United States, marking the anniversary in 1786 of Thomas Jefferson‘s Virginia Statute for Religious Freedom. In President Obama’s declaration for the day, released yesterday, he starts out a little bumpy, concentrating on Jefferson’s assertion that subverting religious freedom would constitute “a departure from the plan of the Holy Author of our religion.” But then the president describes the religious tapestry of the country, and remembers us:

Today, America embraces people of all faiths and of no faith. We are Christians and Jews, Muslims and Hindus, Buddhists and Sikhs, atheists and agnostics. Our religious diversity enriches our cultural fabric and reminds us that what binds us as one is not the tenets of our faiths, the colors of our skin, or the origins of our names. What makes us American is our adherence to shared ideals — freedom, equality, justice, and our right as a people to set our own course.

That’s three references in two sentences to nonbelievers. I think that’s a really good thing. It’s not the same as changing this wall-of-separation breaching policies and actions, but again, words matter. Being cited as a part of the “cultural fabric” of America by the President of the United States carries weight and signifies great progress for us.

He goes on to herald the importance of religious freedom around the world:

America proudly stands with people of every nation who seek to think, believe, and practice their faiths as they choose. In the years to come, my Administration will remain committed to promoting religious freedom, both at home and across the globe. We urge every country to recognize religious freedom as both a universal right and a key to a stable, prosperous, and peaceful future.

As we observe this day, let us celebrate America’s legacy of religious liberty, embrace diversity in our own communities, and resolve once more to advance religious freedom in our time.

Correction: A previous version of this post said that Religious Freedom Day was January 15. It is in fact January 16.