Nepal’s Girl ‘Goddesses’ Will Receive Reparations After Having Their Childhoods Taken Away from Them January 16, 2014 Hemant Mehta

Certain Hindu and Buddhist groups in Nepal have a tradition of worshiping pre-pubescent girls, known as Kumari, who are deemed manifestations of the goddess Durga. These girls are selected at ages as young as four — and they’re forced to “retire” by the time they hit puberty. It’s like “Toddlers & Tiaras” minus the pretending. These girls were chosen.

For centuries, they didn’t get an education during their reign because, of course, they’re “divine” — a policy that didn’t change until 2008 thanks to a Supreme Court ruling — and they’re catered to for the near-decade they live in their privileged world. By the time their hit their teenage years, they’re like injured college athletes left to fend for themselves because their colleges aren’t paying for scholarships anymore.

As of this week, though, they’re going to get a little bit of help. 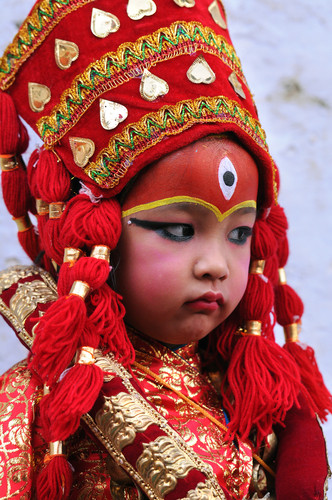 The council made the decision this week as part of efforts to help the girls who are worshipped as goddesses, but lose their special status once they reach puberty.

It’s not a lot of money — just over $12,000 over the ten year span — but the reparations are at least a start to make up for an awful system that removes girls from their families, treats them like queens before they’re even old enough to know what’s happening, and tosses them aside the moment they’ve outlived their usefulness.

Even better than the money would be eliminating the reprehensible system in the first place, traditions be damned.

(via The Freethinker — Image via Hung Chung Chih / Shutterstock.com)

January 16, 2014
A City Council in Florida Keeps a Bible Handy... Because Tradition
Next Post

January 16, 2014 This is Why I Miss Richard Dawkins' Science Writing
Browse Our Archives
What Are Your Thoughts?leave a comment