A City Council in Florida Keeps a Bible Handy… Because Tradition

If you want attend a meeting of the Pinellas Park City Council (in Florida), take a good look at the book resting by the Mayor’s seat atop the dais: It’s a Bible that was gifted to the council by the local Kiwanis Club several years ago — which City Manager Doug Lewis claims makes it a historical artifact instead of an affirmation of any religion: 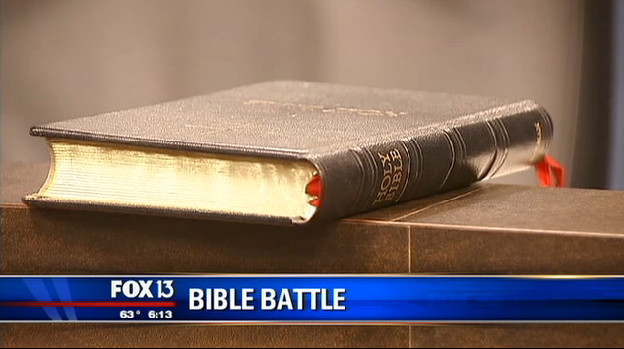 “The Bible was given to the city by the Kiwanis Club, I believe when the building was dedicated,” Lewis said. “They feel it’s part of City Hall, as being part of the dedication ceremony, and it’s become part of the history of the building.”

“I think that’s dubious at best,” [Freedom From Religion Foundation attorney Andrew] Seidel countered. “This isn’t a Gutenberg Bible that was printed on the first printing press, nor is it displayed in a museum. It is displayed at the very seat of government.”

This “historical” argument is one Christian groups use all the time. Basically, if something has “always” been there, it should remain there. Even when it’s illegal. That was the argument used by the Cranston School District when they defended their religious mural and it’s the argument that’s constantly used by Christians who want to keep “Under God” in the Pledge of Allegiance. It’s an argument that’s bullshit right off the bat, as if the same groups would be perfectly fine with atheistic or Islamic displays on government property if only they had been erected a few decades ago.

The only reason for the Bible to be given a special place on the dais is to remind everyone that Christianity is the only religion that matters to the community leaders.

FFRF has complained about the Bible since the summer, on behalf of local businessman Randy Heine, but the city has refused to respond. That may be changing soon as the council’s attorney is finally looking over FFRF’s letters, the most recent of which was sent this past Monday.

By the way, the Bible isn’t even the city’s only transgression:

[FFRF] also takes issue with including inserts for church-based events in the city’s utility bill mailings.

Christ… They’re not even trying to be subtle about this.

FFRF is giving them a legal out: Stop what you’re doing and we’ll walk away with no litigation. It’d be foolish for Pinellas Park officials to reject that offer and put their town in jeopardy just because some people don’t know or don’t understand how the law works.