‘Almost a Tenth of Babies and Toddlers in England and Wales are Marxists’ January 13, 2014 Hemant Mehta

If any newspaper article began that way, it would make no sense at all, but that didn’t stop The Times (UK) from saying something just as silly:

Almost a tenth of babies and toddlers in England and Wales are Muslim, a breakdown of census figures shows.

The percentage of Muslims among the under-fives is almost twice as high as in the general population. In an indication of the extent to which birthrate is changing the UK’s religious demographic, fewer than one in 200 people over 85 is Muslim.

Richard Dawkins, echoing what he wrote in The God Delusion, rightfully called them out on it in a letter-to-the-editor today: 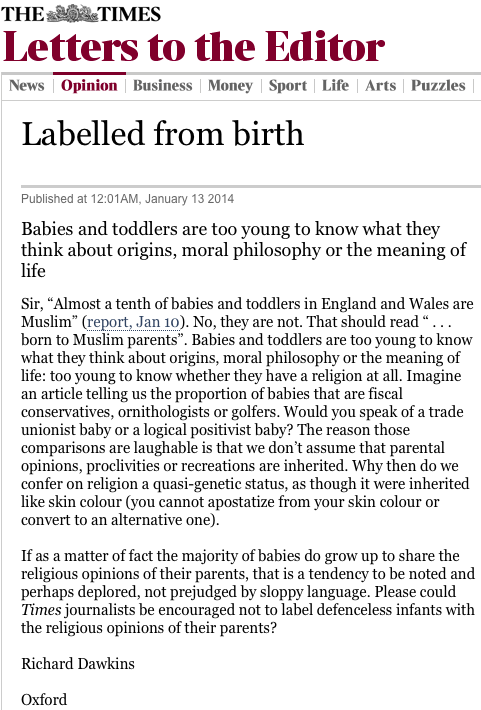 Of course, he’s absolutely right on this issue. As he said, is it so hard for people — especially reporters — to understand the line would only make sense if it began “Almost a tenth of babies and toddlers in England and Wales are born to Muslim parents…”?

January 13, 2014 Methodist Church in Indiana Split on Whether Gay Employee Should Have Been Fired
Browse Our Archives
What Are Your Thoughts?leave a comment