Is there anything the faithful won’t do if you first make them believe it’s a way to honor God?

It looks like South African pastor Lesego Daniel is on a mission to find out.

In a wildly unorthodox demonstration of how humans can be controlled by the Holy Spirit and eat just about anything to feed their bodies, a South African pastor made members of his church eat grass. …

According to a report in African Spotlight, Pastor Lesego Daniel of Rabboni Centre Ministries had his followers eating grass after explaining in a sermon that Jesus had many other disciples other than the 12 listed in the traditional Bible who were doing new things which were considered unconventional at the time as well.

Clearly, grass is not the only thing these folks are swallowing. 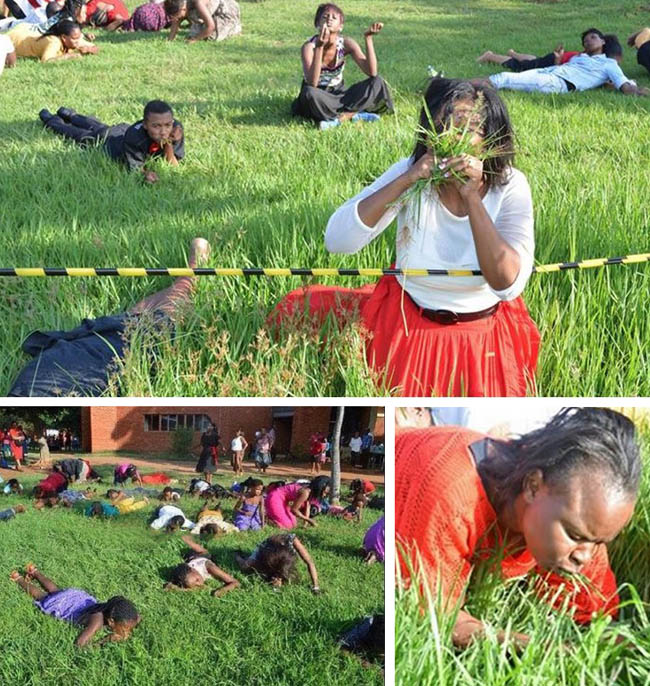 I’m left with all kinds of questions. If God had wanted us to eat grass, why did He create cows? Don’t these people know that grass is much mellower when smoked? In addition to spinach, do we really need to worry about other greens sticking in our teeth? And, um, won’t eating grass upset your stomach and cause bloat?

Wait a minute, that might explain what’s going on here, during one of the Reverend Daniel’s other divine exploits. Watch him supposedly cure a woman’s “demonic pregnancy”:

Of all the faith-healing exorcisms I’ve seen, none have ever shown the demon visibly leaving the body. It’s always this ho-hum pantomime, as predictable as watching some Marcel Marceau wannabe trying to find his way out of an invisible box. How disappointing is that? I mean, if the demon is physically present, as “evidenced” by the woman’s distended stomach, why don’t we see the hellish presence actually slithering out of this lady’s birth canal?

After she expelled that baby’s worth of intestinal gas, I reckon the smell of sulfur was in the air, and those present probably took it as evidence that the odoriferous Lucifer had been vanquished.

(Thanks to Hanno for the link.)