Are You Out of the Closet as a Non-Believer? ‘Cracked’ Advises People Who Want To Be Liked To Hide Their Atheism January 11, 2014 Terry Firma

Are You Out of the Closet as a Non-Believer? ‘Cracked’ Advises People Who Want To Be Liked To Hide Their Atheism

Cracked is the Internet champion of the crack-you-up listicle. This recent one, titled 5 Seemingly Insignificant Things That Make People Like You, caught my eye. Number 2 on the list:

Hide Your Atheism, Even from Other Atheists

Author P. Chung correctly (and hilariously) writes about the academic research behind that bit of depressing advice, particularly the studies by Will Gervais at the University of British Columbia. Back in 2011, Gervais and his team showed that prejudice against atheists has us scoring lower in the trust department than rapists; and that most people, if they’d employ atheists at all, would place them in low-trust positions, like waiter, rather than in high-trust ones, like childcare provider. (Makes you wonder if those folks have never heard of the never-ending spate of child sex abuse cases in both Protestant and Catholic churches.)

Still, Cracked‘s conclusion won’t get us very far, and I’d prefer that none of us felt compelled to “hide our atheism.” Chung’s advice reminded me of this cartoon: 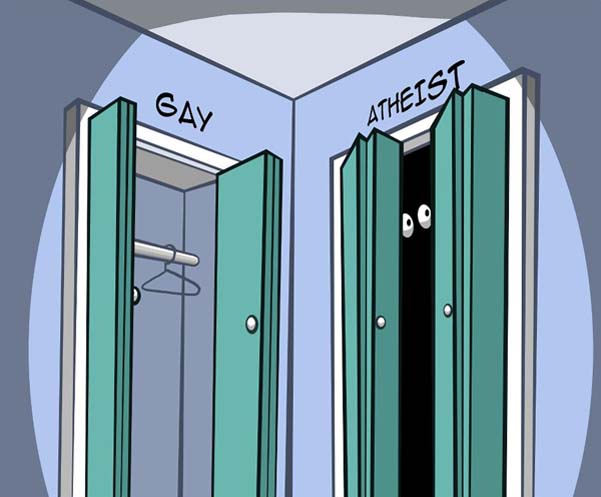 [T]he LGBT community did something we can learn from. They stood up. They came out of their proverbial closet. They came out and were proud of who they were and were unapologetic about it.

As a result, so many straight people began to realize that they had gay neighbors, colleagues, relatives, and friends, that being gay stopped being scary.

Without drawing the LGBT parallel, Hemant said something similar a few years ago, after the Gervais study came out:

[W]e have to let people we trust know that we’re atheists. People think poorly of atheists because they don’t think they know any. It’s a shock to their system when they find out someone close to them doesn’t believe in a god… so shock them! Let them know that someone they already trust is an atheist.

I’ll come clean here and say that I’m an in-betweener: one foot in the closet, one foot out.

All my friends and relatives know I’m an atheist, and I’m hardly shy about disclosing my non-belief when the topic of religion comes up.

Still, I blog under a pen name. That’s because my wedding photography business brings me in frequent contact with clergy, and, more importantly, with a good number of couples who are planning a religious wedding. It’s likely that most prospective clients, before signing on the dotted line, google my name. Given what Will Gervais and others found, I’d lose business if the search results invariably returned hundreds of web pages on which I’m not particularly kind to Christianity and other faiths. Every potential client who walks away is a $3,000 to $5,000 hit to my bottom line, and, well, my kids do so love to eat…

Plus, in general, it just seems to make good business sense to me — maybe it’s even a sign of professionalism? — to studiously separate your political and religious beliefs from your business.

Now it’s your turn. Are you in the atheist closet? If so, what do you make of the idea that we’d fare better as a group if people knew you’re not a believer? And what would it take for you to come out?

January 11, 2014
Imagine No Religion 4 Conference Taking Place This May
Next Post