Snake-Handling Pastor Slips Away from Indictment

The state has a law again possessing venomous snakes and Hamblin was violating it — not to mention exploiting it on the National Geographic Channel’s now-canceled show “Snake Salvation.”

But Hamblin just got a huge break: 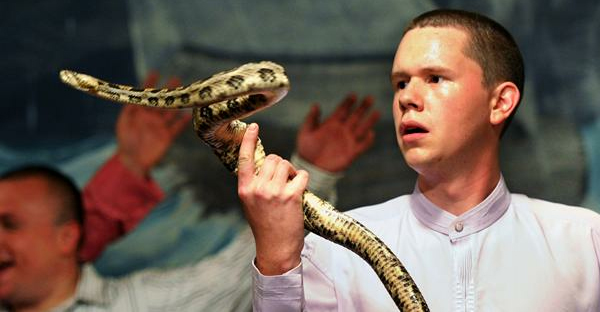 After a hearing on Wednesday…, a grand jury decided not to indict the Rev. Andrew Hamblin on charges of violating a state ban on possessing venomous snakes.

He was thrilled by the grand jury’s decision.

“I’m ecstatic,” he said in a phone interview Wednesday. “All the headlines should read ‘Snake handlers have religious rights in Tennessee.’”

Hambin said he was allowed to address the grand jury for half an hour at the hearing. His defense was simple. The snakes weren’t his, he said. They belonged to the church, and Hamblin said the wildlife officials had no business raiding a church.

“To me it violated my right as an American to have my freedom of religion. It shouldn’t matter to people if the Lord moves on me and I feel like I need to take up a six-foot rattlesnake. I should have that God-given right,” he said.

I swear I didn’t make up that last statement. That guy wants to fight for his right to die a preventable idiotic death and win a Darwin Award.

Hamblin won’t be getting his snakes back from the Knoxville Zoo — more than half of them died from anorexia caused by Hamblin’s inability to care for them — but I suspect he’ll just find a way to get some more.

I fear the members of that church may not learn their lesson until someone gets fatally bitten. I don’t wish that upon them, but right now, Jesus mixed with venom may be clouding their better judgment.

January 10, 2014
Father of Boy Who Died Thwarting a Suicide Bomber is Very Happy; Can't Wait For Other Son to Get Martyred, Too
Next Post