Father of Boy Who Died Thwarting a Suicide Bomber is Very Happy; Can’t Wait For Other Son to Get Martyred, Too January 10, 2014 Terry Firma

Father of Boy Who Died Thwarting a Suicide Bomber is Very Happy; Can’t Wait For Other Son to Get Martyred, Too

Earlier this week, we learned details about a 10-year-old Afghani girl, Spozhmai Ghafar, whose older Taliban brother had allegedly outfitted her with a suicide vest and instructed her to blow up a police checkpoint. She refused and is now in protective custody. (The Taliban denies the charge.) 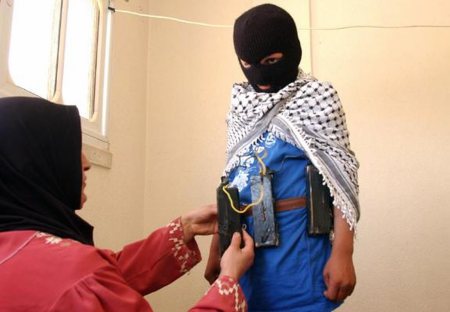 Now comes the story of another child, a 14- or 15-year-old in Pakistan named Aitzaz Hassan, who did die in a bomb attack — and who is thought to have saved many other children’s lives by doing so.

“My son made his mother cry, but saved hundreds of mothers from crying for their children.” These were the words spoken this week in the north-west of Pakistan by a man whose teenage son was killed as he stopped a suicide bomber entering a school.

Aitzaz Hassan, 15 [other reports say he’s 14], died in hospital after confronting the bomber who then blew himself up at the school gates in the district of Hangu on Monday. As people across Pakistan spoke out in praise of the teenager’s courage, the boy’s father returned to the country from the Middle East to offer his own tribute.

“Aitzaz has made us proud by valiantly intercepting the bomber and saving the lives of hundreds of his fellow students,” 55-year-old Mujahid Ali Bangash, told the AFP news agency.

For my taste, Mr. Bangash is overdoing it just a tad with the martyrdom stuff.

“I am happy that my son has become a martyr by sacrificing his life for a noble cause,”

… AFP quotes him as saying. Happy? Is that le mot juste here? Could it be clumsy phrasing by a grieving father? Did something get lost in translation? Maybe not:

“Many people are coming to see me but if they try to express sympathy, I tell them to congratulate me instead on becoming the father of a martyr. I will be even more than happy if my second son also sacrifices his life for the country.”

If the story of Aitzaz Hassan is true, the boy is a hero, no question. But I can’t be the only one who is a little skeeved by a father so deliriously happy at the thought of his brood getting blown to smithereens.

Perhaps that’s just my cultural biases showing. Armchair anthropologists, feel free to set me straight. But right now, it seems to me that Hassan senior plays to the stereotype that in the Middle East and South East Asia, even among Muslims who want peace, Islam can still be a death cult.

January 10, 2014 Snake-Handling Pastor Slips Away from Indictment
Browse Our Archives
What Are Your Thoughts?leave a comment