Texas Board of Education Candidate Claims That ‘We Know We Didn’t Come from Monkeys!’ January 9, 2014 Hemant Mehta

Texas Board of Education Candidate Claims That ‘We Know We Didn’t Come from Monkeys!’

This is Lady Theresa Thombs lamenting about an upcoming election: 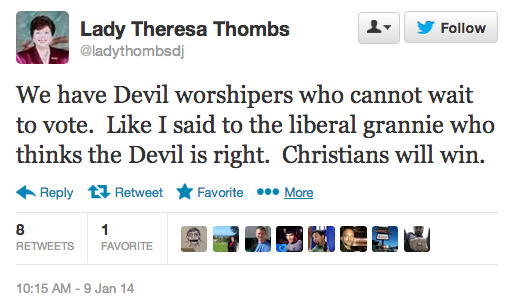 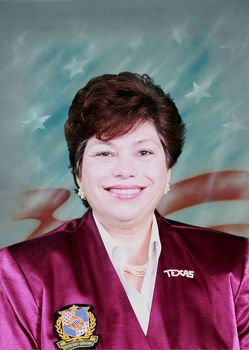 If she were a random conservative, few people would care, but this is someone running for a seat on the Texas State Board of Education. She thinks she can win the race with brilliant barbs like that one that she made at Monday night’s candidates forum. But things only got worse from there:

History, she stated, should be written by “experts, not people from socialist higher education.” As far as the sciences go, “We know we didn’t come from monkeys!”

“Ladies and gentlemen,” she began in summation. “They’re using your tax dollars to brainwash our children into socialist issues and ideas and it is time for it to stop. Common Core and every single shred of CSCOPE has got to go.”

That’s pretty entertaining since her own website says part of her mission is “To give the freedom for teachers and parents to aid the State Board of Education in choosing curriculum that is vital to the future of the children of Texas.” Freedom for teachers! Unless they want to teach someone she doesn’t like, in which case they’re socialists.

At the 5:15 mark of this video, you can see her opening statement from the forum:

It’s not at all surprising that she’s doing this, not because she wants what’s in the best interest of children, but because she believes God wants her to:

Please, Texans, stop her. She would be a disaster, pushing the state backwards to a scary time when science took a back seat to religious ideology. (I believe that was two months ago.) She has every right to run but we have every right to make sure she never wins office.

January 9, 2014 Did This Poll About Women's Attire in Muslim Countries Ask the Wrong Question?
Browse Our Archives
What Are Your Thoughts?leave a comment