South Carolina Lawmakers, Seeking to Introduce Daily Prayer in Schools, Have Kindly Thought of Atheists, Too

I thought I’d share a warm and fuzzy update in the renewed legislative fight of seven Democratic and three Republican lawmakers to have kids “enjoy” a daily prayer — sorry, I mean “a moment of silence” — in South Carolina public schools. 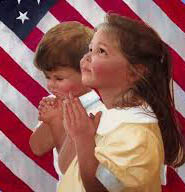 As I noted in my previous post about the initiative, there can be no doubt about what this forced daily silence is intended to do. One of the bill’s sponsors, Rep. Wendell Gilliard, stated that

“The essential part of the bill, the important part, is putting prayer back in school.”

But you’ll be happy to learn that one of his co-sponsors, fellow Democrat Joseph Jefferson, says that the interests of atheists are represented in the bill as well. How so? Because, he explained:

“Even the atheists, it gives them the option of praying or not praying without anybody interfering.”

He’s giving kids from nonbeliever families the option to pray. Isn’t that special? I’m sure you’ll join me in thanking Joe Jefferson for his kindness in thinking of us atheists.

January 9, 2014
The Los Angeles County Seal Will Soon Have a Cross on It
Next Post