This post is a twofer. First, I’m happy to share the news that the American wannabe jihadist Colleen LaRose has been given a ten-year prison term for conspiring to murder the Swedish artist Lars Vilk.

Colleen LaRose, 50, who dubbed herself Jihad Jane, admitted in 2011 she sought to kill Lars Vilks and recruited others to the cause.

She faced up to a life term but a judge reduced her sentence in part because she co-operated with investigators.

“I don’t want to be into jihad no more,” LaRose said at the hearing.

Mr Vilks was targeted after he drew a cartoon depicting the Prophet Muhammad as a dog.

For real? Mr. Vilks was never attacked? The BBC has quite the (recent) history of kowtowing to Islamists and their sympathizers. Either this is another example, or it’s a lazy error that a 10-second search of the BBC’s own archives would’ve handily prevented: 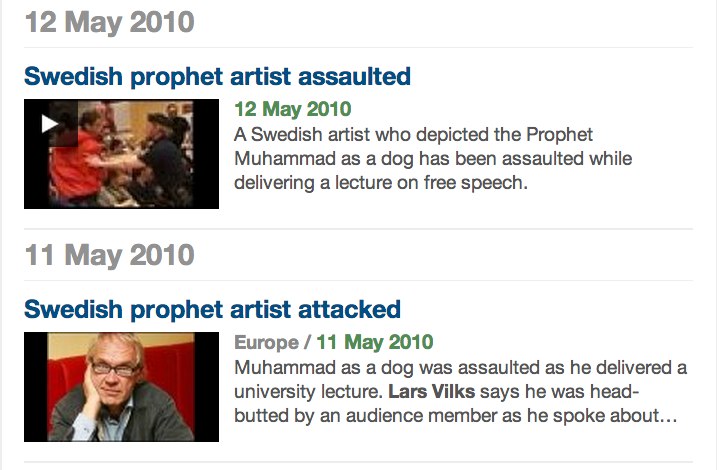 The attacks on Mr. Vilks are pretty well documented elsewhere, too. First, in May of 2010, he was beset by a mob of angry Muslims and other defenders of Islam. Vilks was either headbutted or struck (accounts vary) by one particularly unhinged protester.

[During a presentation at] Uppsala University in Sweden, a protester charged the dais and hit him, breaking his glasses. Police were forced to detain or pepper-spray some unruly members of the crowd as other protesters yelled “Allahu Akbar” — “God is great.”

A few days later, the artist’s home was broken into and firebombed. It’s fortunate that Vilks was away at the time, just as it was fortunate that the fire went out by itself, leaving only burn marks and minor soot damage.

For a brief second, I weighed the possibility that the BBC reporter meant to say that Colleen LaRose hadn’t actually attacked Vilks, but that doesn’t make sense when you look at the passive phrasing of the sentence in question.

I’ve asked the BBC editors for an explanation and a correction, and will let you know if I receive a response.

January 8, 2014
Bill de Blasio May Be One of the Highest-Ranking 'Nones' in America
Next Post

January 8, 2014 A Dangerously Incurious Pope
"If you include me in this “they-they-their-they’re-they-they-they,” your accusation is false.I am opposed to the ..."
Henry Kelly Do Rape Victims Have Too Many ..."
"It's like a mobile phone that doesn't fit in your pocket!"
mordred GOP Activist: White Christian Men “Are ..."
"There is an ice wall around the edge of the world. Why do you think ..."
The Mighty Damuramu (pka TOW) Ark Encounter Ticket Sales Went Up ..."
"You can PERSONALLY be antislavery without imposing your PERSONAL opinion on others. That’s called being ..."
Henry Kelly Do Rape Victims Have Too Many ..."
Browse Our Archives
What Are Your Thoughts?leave a comment