Is it Time to Move on from the New Atheism? January 7, 2014 Hemant Mehta

Is it Time to Move on from the New Atheism?

The New Humanist, in its Winter 2013 issue, asks the question “Is it Time to Move on from the New Atheism?” 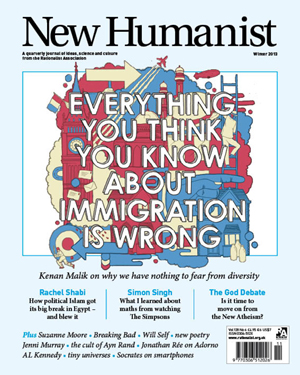 Equally, claiming that science has nothing to tell us about morality and meaning is obviously false to anyone who thinks about it for more than ten seconds. Is morality the same across all cultures? How much of it is innate, how much learned? Human behaviour is evolved, like all animal behaviour; empirical evidence can tell us how, and why, it evolved. The idea that science shouldn’t examine it, and can reveal nothing about it, is laughable.

Perhaps the critics are right (and I have written in the past asking Dawkins to “be quiet” after a particularly crass tweet about Muslims), and the time has come for atheists to start thinking about finding the good things about religion, to stop fighting and start making peace. But I suggest that they — we — are only in a position to do that because the scorched-earth blitzkrieg of the New Atheists has won so many battles, and got its perceived enemies in such a panicky retreat. Maybe it’s time to be magnanimous in victory. I’m sure that the New Atheists themselves, though, would say that when you’ve got your opponent on the floor, you keep them there.

Author Terri Murray puts to rest the allegations of the atheists being “strident” and arrogant:

The New Atheists have never pretended that their confidence that some opinion is false justifies suppressing the expression of that view, as this would imply not only that they are confident of being right, but that they are infallible. Dawkins, Dennett and their ilk have painstakingly explained why falsification is the very foundation of inductive science, and why empirical claims are by their very nature tentative and incomplete. The New Atheists dare to exude confidence because they have, unlike their religious opponents, allowed their ideas to be tested against evidence and the merits of alternative viewpoints.…

Alom Shaha, author of The Young Atheist’s Handbook, believes the New Atheists are focusing on the wrong things:

I can’t help but feel that people who expend huge amounts of time and energy trying to convince other people of the non-existence of God are largely wasting their time. It’s easy to criticise religious belief, to point out the irrationality of faith, to show that God is just an idea. Young children can identify for themselves that the religious stories they’re told are inconsistent with the reality they experience, and arrive by themselves at the conclusion that there isn’t really a God. But even in the face of overwhelming evidence that their God is a fiction, many people continue to have “faith” because that’s how their minds work…

The New Atheists have put the arguments against religion in powerful, eloquent terms and have clearly helped many people to be comfortable, even proud, to identify as atheists. A quick search on the internet will reveal hundreds, if not thousands, of people who credit The God Delusion for ridding them of their belief in God. Dawkins, Hitchens, Harris and Dennett are understandably heroic figures to many but I fear that they are not the sort of heroes we need when there are other issues at stake. When there’s a religiously motivated terrorist attack, I’m not sure it’s helpful to attack religion, to vilify believers. When we have children being segregated from each other on the grounds of their parents’ religions, I’m not sure arguments about the non-existence of God are useful. When we want to implement laws and policies that tackle inequality, pointing out the silly, anachronistic rules in ancient religious texts is not how we ensure support from religious people who are on our side.

Finally, Ariana Sherine, the creator of the Atheist Bus Campaign and the Give Just One Thing campaign, believes too many atheists these days are more interested in mocking theists than making logical arguments:

I still think that the more rational the world is, the better, and am heartened by any sign that it is becoming less religious. But the scathing, often cruel slurs of my fellow atheists make me despair. The question I ask more often these days is: how can anyone think that calling religious people names is going to sway them from their firmly held convictions?

Sherine makes a fair point that name-calling won’t get us anywhere. We already have the arguments and evidence on our side; we don’t need to resort to slurs.

That said, I still side more with the first two contributors in defense of the New Atheists. It’s easy sport to criticize prominent atheists for raising unpopular questions and blaming them (sometimes for good reason) when atheists treat religious people with nothing but contempt, but their contributions are overwhelmingly a net positive for all of us. They tipped over a sacred cow and began a domino effect we’ve still feeling today.