In Defense of the Student Who Wanted to Hand Out Candy Canes with Biblical Messages on Them January 7, 2014 Hemant Mehta

Here’s the setup: Just before the holidays, 6-year-old Isaiah Martinez (below) went to Merced Elementary School in West Covina, California with a pack of candy canes in hand to give to his classmates. Each candy cane had attached to it a religious message that told the “legend of the candy cane” which, believe it or not, has everything to do with Jesus dying on a cross. 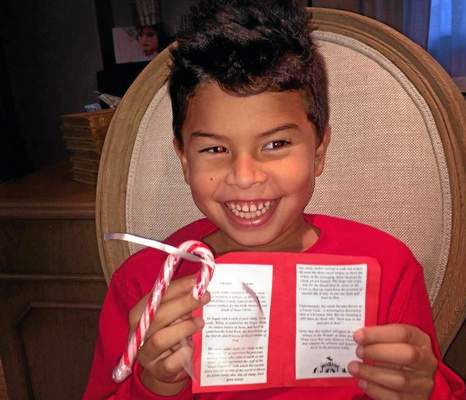 His teacher, not wanting to get in trouble, removed the messages from the candy canes, then handed them back to Isaiah to give to his friends, apparently telling him “Jesus is not allowed in school.”

So, of course, a Christian group is threatening to file a lawsuit against the district:

He “then nervously handed the candy canes to his classmates in fear that he was in trouble for trying to bring a little Christmas cheer and ‘good tidings’ to class,” said his lawyer, Robert Tyler, an attorney for the Advocates for Faith & Freedom, which works to preserve religious liberty in the legal system.

Tyler sent a letter to the West Covina Unified School District demanding a written apology and the implementation of a new policy to prohibit school officials from “bullying and intimidating” Christian students and religiously affiliated students, he said.

When you take away the Christian spin, however, you realize the school was trying to do the right thing, not persecute Christians. Letting a student proselytize to fellow classmates worried administrators so they tried to put a stop to it:

“The district’s overriding concern was and is to honor and respect the beliefs of all students in matters of religion,” Debra Kaplan, the superintendent of the West Covina Unified School District, wrote in a statement. “At the present time, we do not have any reason to believe that the teacher or any other district employee had any intention other than to maintain an appropriate degree of religious neutrality in the classroom and to communicate this to the child in an age-appropriate manner.”

It pains me to say this, but they probably should have let Isaiah pass out his Jesus-loving candy canes. He’s a student and he’s allowed to proselytize if he wants (as long as it’s not disrupting the class). Considering that students were allowed to bring in gifts without prior restrictions, it seems weird to tell him he can’t hand out a Christian message in the process. It’d be a different story if we were talking about a teacher doing this.

Loyola Law School professor Aaron Caplan explained to one news outlet some of the considerations worth addressing:

If the school allowed students to bring whatever gifts they wanted, then it would be improper for the school to place limitations on just one type of gift, he explained. But if the school restricted gifts or messaging, then it has to be religiously neutral.

“Does the school really want to have a policy where, say, students can distribute white supremacist messages around a candy cane? Schools will say this is not a complete free speech zone, there are boundaries. Part of the legal question is, what are those boundaries?” Caplan said.

If the school district wants to fight back, they may be in for a long and costly legal battle. A similar case based in Texas has been going back and forth in the court system for more than a decade.

Oh. And the whole “legend of the candy cane” is pure bullshit, which Robert Tyler might have learned if he spent two seconds researching it online, a skill he apparently never picked up in law school:

Claims made about the candy’s Christian symbolism have become increasingly widespread as religious leaders have assured their congregations that these mythologies are factual, the press have published these claims as authoritative answers to readers’ inquiries about the confection’s meaning, and several lavishly illustrated books purport to tell the “true story” of the candy cane’s origins. This is charming folklore, but one should not lose sight of the fact that such stories of the candy cane’s origins are, like Santa Claus, myths and not “true stories.”

January 7, 2014
How Come No One with a Near-Death Experience Ever Writes About This?
Next Post