There’s No Atheist Church ‘Schism’ No Matter What CNN Publishes

A report on CNN’s website by Katie Engelhart claims that there’s a schism in the “atheist church” (*cue dramatic music*) that could even lead to the collapse of the movement:

So popular was the premise, so bright the promise, that soon the Sunday Assembly was ready to franchise, branching out into cities such as New York, Dublin and Melbourne.

“It’s a way to scale goodness,” declared Sanderson Jones, a standup comic and co-founder of The Sunday Assembly, which calls itself a “godless congregation.”

But nearly as quickly as the Assembly spread, it split, with New York City emerging as organized atheism’s Avignon.

The squabbles led to a tiff and finally a schism between two factions within Sunday Assembly NYC. Jones reportedly told Moore that his faction was no longer welcome in the Sunday Assembly movement.

Moore promises that his group, Godless Revival, will be more firmly atheistic than the Sunday Assembly, which he now dismisses as “a humanistic cult.”

This is a complete non-story, a media invention, just a personality conflict involving two conflicting views of what atheists may want out of a community.

Here’s the Venn diagram of people who may be interested in either one of these groups: 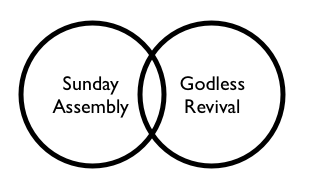 There aren’t a lot of people who would have to make a huge decision here. 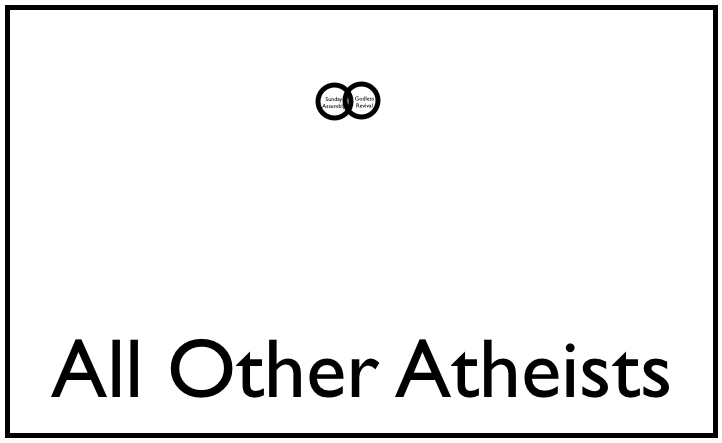 The number of atheists affected by this “schism” is roughly somewhere in the low double-digits.

Look: The Sunday Assembly organizers believe you’ll reach more people if you hold family-friendly gatherings that celebrate life without even bringing up religion. They’ve certainly stumbled upon a promising idea, given the number of headlines about them over the past couple of years, but it’s too early to tell (at least in America) if this will be an idea that survives long-term.

The Godless Revival organizers in New York City believe you’ll draw in more atheists if you’re not afraid of saying the A-word, something that might not appeal to people on the fence or those apathetic toward religion but could entice a more aggressively non-religious crowd.

For most atheists, the response has been a collective, “meh.” Organized-anything doesn’t sound very appealing to a lot of us, but for those who might like that sort of thing, these groups are helpful.

You rarely see headlines saying there’s a “schism” in the Christian community just because a university has both a Campus Crusade for Christ and InterVarsity Christian Fellowship group. They’re both Christian, they go about practicing and spreading their ideas in somewhat different ways, and if you don’t like it, you can just ignore them. I don’t see the difference here — if anything, it’s at a massively smaller scale.

But for whatever reason, CNN believes this minor difference of opinion between a couple of atheists is some “schism” worth discussing. It’s not.