Losing Political Candidate Sues Rival Who Cursed Her With a ‘Black Magic’ Mural of a Giant Rooster January 5, 2014 Terry Firma

When, in the Democratic primary of this past fall, Gwen Goodwin decisively lost her race for a New York City Council position, she decided that her defeat was perhaps the result of supernatural forces. Now Goodwin has filed a million-dollar lawsuit against her winning rival, Melissa Mark-Viverito, alleging the infliction of “emotional distress.”

Goodwin charges that under Mark-Viverito’s direction, a mural of a blue rooster’s head balancing on wooden slats was painted on the side of her building.

Mark-Viverito was the head of an urban-art campaign launched last summer called Los Muros Hablan (“the walls speak”). The effort celebrates Latino culture by painting murals on walls across the five boroughs. …

“According to neighbors of Puerto Rican and other backgrounds, in the Caribbean culture, [the rooster image] constituted a curse and a death threat, as a swastika or a noose would symbolize typically to many Jews or African-Americans,” Good­win alleges in a Manhattan Supreme Court suit she filed Friday.

This is the mural in question. It’s plenty attractive, except maybe for followers of voodoo or Santeria. 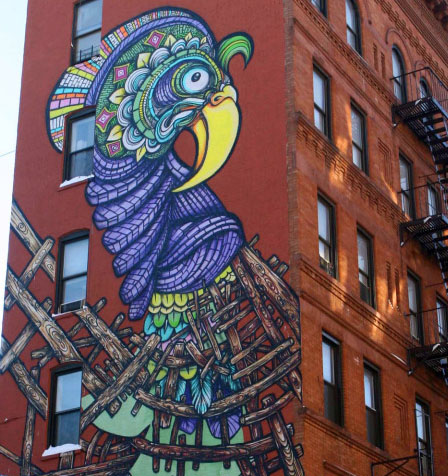 According to ABC, the artwork

… led to her becoming distracted and her campaign to lose energy. [Goodwin] says it may be “one possible reason for her loss during the Democratic primary for city council speaker.”

Believe it or not, this case has a precedent of sorts. Last May, Anna Pierre, a nurse, ran for mayor of Miami and finished last with just 0.86% of the vote — despite the fact that she’d claimed to have been endorsed by Jesus. Pierre had earlier alleged that political enemies sought to torpedo her campaign by leaving black-magic items outside her office, including candles and dolls with pins stuck in them (apparently, Jesus and his Dad were no match for a few dime-store voodoo items).

Partly thanks to the power of Google, Goodwin and Pierre will now never amount to anything politically.

Wish we could say the same for other candidates whose daffy superstitions ought to cast their fitness for office into doubt.

January 6, 2014 At Yesterday's Interfaith Prayer Service for Boston's Mayor-Elect, a Humanist Delivered the Final Remarks
Browse Our Archives
What Are Your Thoughts?leave a comment