Ax-Wielding Father Vanquishes the Devil, Who is His Son January 2, 2014 Terry Firma

Ax-Wielding Father Vanquishes the Devil, Who is His Son

What do you do when your teenage son turns into a devil (as they do)? For 51-year-old Gary Sherrill (seen below), the answer involved something darker than a mere exorcism. 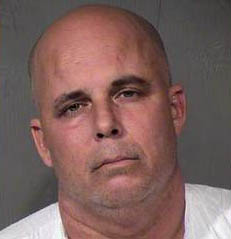 A Phoenix man killed his 13-year-old son with an ax because he thought the boy was a demon, police said Wednesday.

The suspect, 51-year-old Gary Sherrill, confessed to murdering his son, David, on Tuesday afternoon because he was afraid of him, Phoenix Police Sgt. Steve Martos said in a press release.

“(He) stated he was scared of his son and believed his son was a demon and was going to eat him,” Martos said.

Sherrill has been charged with first-degree murder.

January 2, 2014
To the Pastor Giving Atheism a Shot for a Year: You're Doing It Wrong
Next Post