The Interfaith Youth Core, a group that supports religious pluralism and promotes dialogue about faith and service projects on college campuses, has long had a reputation for being antagonistic to atheists. While their staff and membership always included some people without religious faith and there’s nothing wrong with promoting cooperation and dialogue and service, IFYC would ignore the simple fact that many religious beliefs are simply harmful — in addition to being just plain wrong. While everyone supports respecting religious people, many atheists cannot, for good reason, get behind respecting certain religious ideas. IFYC prefers singing “Kumbaya” than face the reality of what religion has wrought.

It didn’t help that IFYC’s founder, Eboo Patel, compared drawing stick figures of Muhammad (an act of free speech) to screaming “Nigger” in the middle of Harlem, or strawmanned the New Atheists like Richard Dawkins and Sam Harris by suggesting they were incapable of performing an “intimate act of mercy” for a dying religious person, or argued that Christopher Hitchens and Dawkins were primarily interested in “offending religious people” and not pointing out that religious beliefs often have no basis in evidence-based truth.

Despite the tone-deaf Patel’s obvious ignorance of the intentions of the atheist authors and his desire to slam notable atheists whenever he gets a chance (with the exception of the few he’s worked with on a regular basis, myself included), IFYC as an organization has done better in recent years with including atheists in their projects. They’ve even partnered with the Secular Student Alliance on occasion.

In a recent survey of its alumni — not a scientific poll, by any means, but a reflection of the people who graduated from their programs — IFYC revealed something astonishing: Nearly a quarter of the respondents were non-religious: 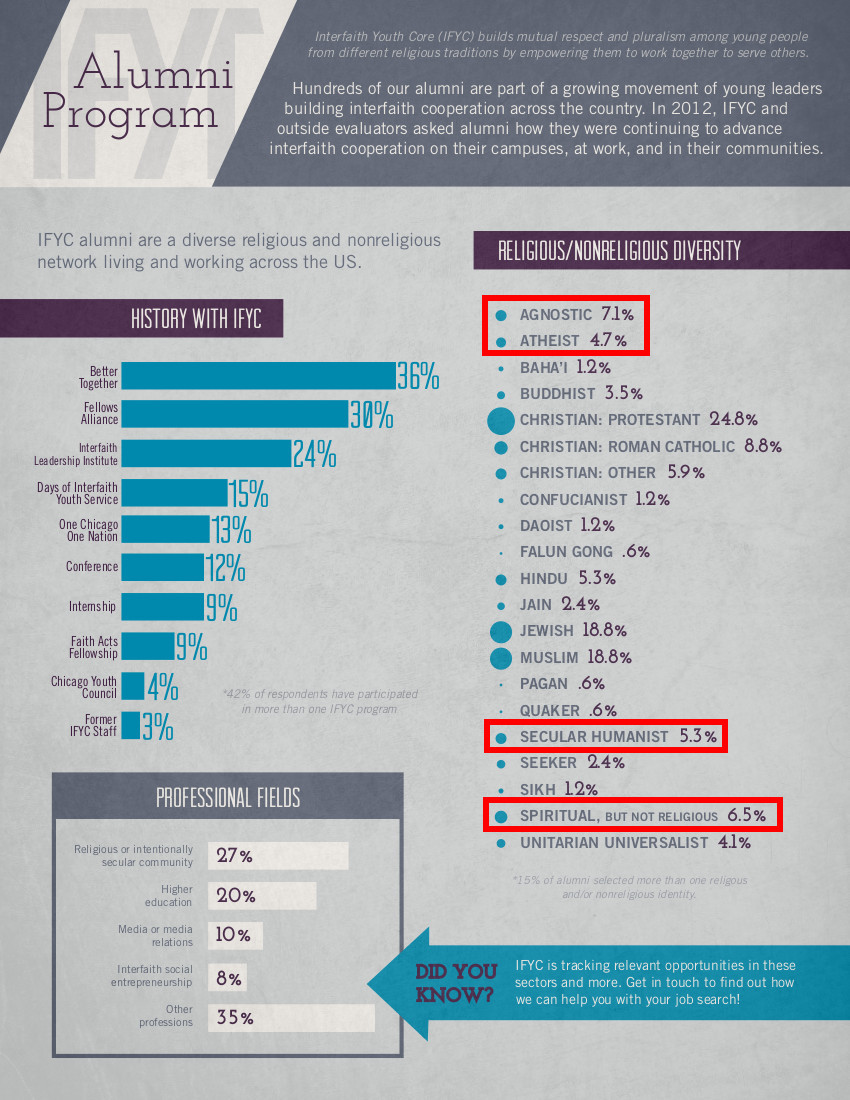 Yes, that 25% includes people who are “spiritual but not religious,” but the percentage is pretty high even when you exclude them.

“The number of IFYC alums that identify as atheist, agnostic, or secular humanist is about as much as our Roman Catholic, Hindu, and Buddhist alumni combined,” said IFYC Director of Alumni Relations Amber Hacker in a recent interview.

The large number of nontheist or nonreligious IFYC alums may come as a surprise to some — perhaps especially those wondering whether nonreligious people are actually welcome in interfaith work.

Chris Stedman, an atheist who’s worked with IFYC in the past, notes that this is a dramatic shift from a few years ago. Even the IFYC staff is about 20% non-religious now.

I see that as a huge net positive for us. You can think religious beliefs make no sense at all while still supporting service projects that are inclusive of people of all faiths and no faith. In fact, it’s better to have non-theistic perspectives in the mix, to make sure no one gets away with saying things like “faith is a virtue” or that you need God to be good. If the interfaith crowd realizes that atheists bring something of value to the table, the better for all of us.

January 1, 2014
If You Support Duck Dynasty's Phil Robertson, This is What You're Really Defending
Next Post