The Illinois Family Institute, like most non-profits, wants to get those end-of-the-year donations, so they’re doing it in typical fashion: by scaring other Christians and reminding them the sky is falling.

And who’s responsible for all their troubles? You know it: those awful, awful teachers: 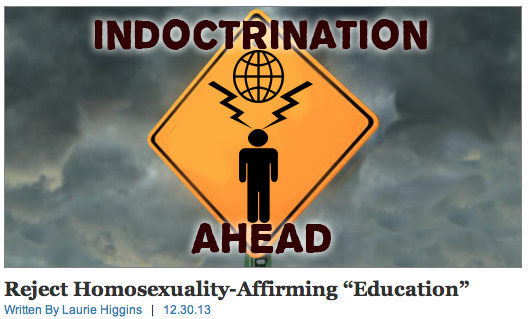 The first educational institutions to succumb to censorship, indoctrination, and oppression were our colleges and universities. Then Leftist sexuality dogmatists came for our high school students, and now they’re taking aim at our littlest ones through “bullying prevention” activities, “comprehensive” sex ed, and discussions of “family diversity.”

Only a right-wing group like IFI would put scare-quotes around topics like bullying prevention, diversity, and realistic sex education that doesn’t end with abstinence. As if discussing those topics are problems instead of solutions.

But they’re not done yet.

Since the number of teachers who push anti-Christian views in the classroom is approximately zero, they decided to go after me because I’m a teacher who also shares his opinions outside the classroom (*gasp*):

Many have probably read about the math teacher… Hemant Mehta, who in his spare time works feverishly on his blog, The Friendly Atheist, where he demonstrates a condescending distaste for all things religious, particularly Christianity, often in language far more offensive than the two anatomically correct terms that got Duck Dynasty’s Phil Robertson in a peck of trouble. Mehta’s been in the news lately for trying unsuccessfully to donate money to the Morton Grove Park Board after they lost funding from the American Legion who objected to a board member who refused to stand for the Pledge of Allegiance.

Mehta, the not-so-friendly atheist, also has guest writers who promote a host of lousy ideas including public acceptance of polyamory (Click HERE, and HERE and take note that these were written over four years ago. They’re no Johnny-come-latelies to the sexual anarchy parade.) So, in his free time, this role model for other people’s children is promoting hostility toward Christianity and goodwill toward sexual deviance.

1) I guess Laurie Higgins couldn’t find anything problematic on this site from the past four years so the had to resort to a column by Richard Wade. Richard, the nicest guy you’ll ever meet and a counselor who has helped more readers of this site than I can count. That’s the worst she could find.

2) I didn’t change the outgoing link to the second “HERE”… IFI accidentally copy/pasted what appears to be an email pitch to two people to get them to come to an event they’re sponsoring. I guess ticket sales are low. Too bad, huh?

3) Did you all know I promote hostility toward Christianity? I sure as hell didn’t. Who knew criticizing bad ideas and supporting church/state separation was tantamount to hating faith?

4) I also had no idea that I promote “goodwill toward sexual deviance.” I think that means I support letting consenting adults do whatever the hell they want with each other. Or that I treat LGBT folks with dignity and respect. Or that I support marriage equality. In any case, you’re welcome!

In all seriousness, if I’m the bogeyman they’re trying to use to convince supporters to give them more money, they really have nothing to complain about. In fact, after correctly pointing out that the things I post on this website are separate from things I teach in the classroom, they still try to conflate the two a couple of paragraphs later:

The teachers mentioned here don’t even scratch the surface of the problem, let alone get to its dark underbelly. Teachers who lack both wisdom and a proper understanding of their roles as public educators (including the limitations thereof) line the halls of academia. The problem is not insoluble, but solving it will take both time and courage. Those who have children in school now or will have children in school shortly need to find alternatives to public education.

IFI already admitted I do understand my role as an educator and keep my atheism out of the classroom. And even though I don’t teach English, it’s not hard to see how their argument lacks credible examples and contradicts itself. If I were a supporter, I’d be embarrassed knowing how my money is being wasted battling teachers like me who clearly have no intention of preaching my personal views to my students.

December 31, 2013
Over the Past Four Years, Republicans Have Become More Likely to Accept Creationism
Next Post

December 31, 2013 The Downside of TED Talks as 'Secular Megachurches'
Browse Our Archives
What Are Your Thoughts?leave a comment