The Becket Fund for Religious Liberty is clearly run by a bunch of people who failed the Analogy section of the old SATs.

Case in point: The legal defense group just bestowed its annual “Ebenezer Award” (awarded to the “most ridiculous affront to Christmas or Hanukkah celebrations”) to the state of Wisconsin for allowing non-Christian displays in their state capitol building.

Because you can’t have Christmas without Christ. (Or Jews, I guess, just to give off the vibe of not being complete assholes.)

They’re referring to the fact that the state capitol has a Flying Spaghetti Monster display (along with other atheist signs) right alongside a Nativity scene. 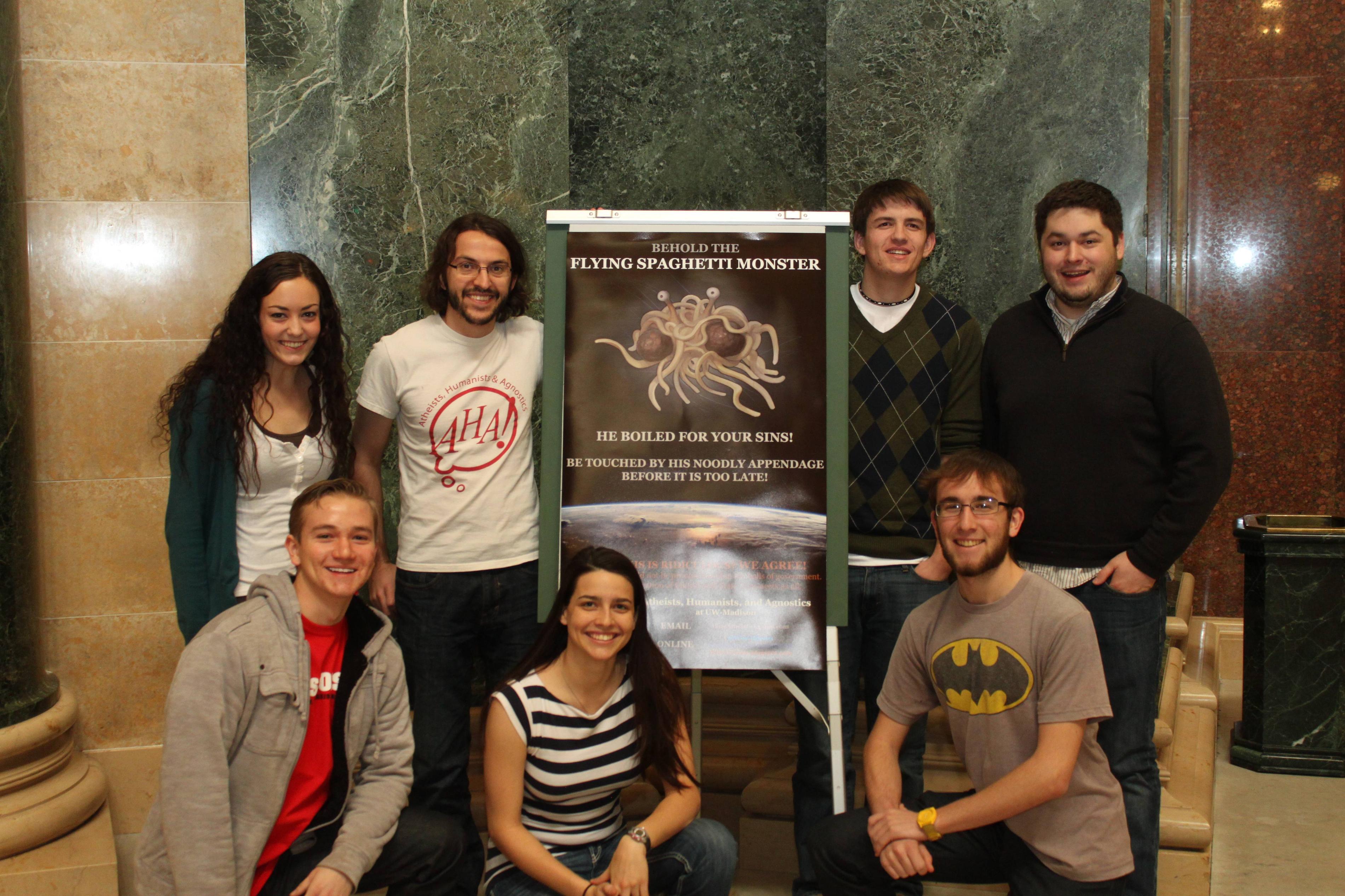 Here’s what the Becket people write:

Now, don’t get us wrong. We’re all for free speech. We think everyone should be allowed to speak their mind when the government opens up a forum for speech.

The problem here is that government bureaucrats have forgotten that there is a difference between government speech and private speech. The government is allowed to speak in its own voice and communicate its own message. When it recognizes important aspects of human history or culture, it is not required to include every possible competing message. The postal service can issue a stamp honoring Martin Luther King Jr. without also honoring the Ku Klux Klan. Congress can celebrate Veterans’ Day without also celebrating Pacifists’ Day. And Wisconsin can recognize Christmas and Hanukkah without also recognizing the Flying Spaghetti Monster.

Yeah! They’re all for free speech. Except speech that they don’t like. As Religion News Service’s Brian Pellot put it so well, that means “an organization that claims to champion religious freedom for all [says] that inclusivity is the most egregious offense in this year’s fabled War on Christmas.”

And did you catch the bad analogy? In their mind, allowing an atheist display is like the postal service honoring the KKK. Even though the KKK represents hate and the atheists are merely taking advantage of an open forum that shouldn’t be limited to just Christians. The fact that the Becket folks assume non-Christian speech automatically amounts to the opposite of everything they stand for just shows how little they understand church/state separation.

In case you’re curious, the group’s 2012 Ebenezer award was given to Rhode Island Governor Lincoln Chafee for announcing the lighting of the “holiday tree” only 30 minutes ahead of time so that Christians couldn’t organize a protest in time. Because Christians would want to protest the lighting of a tree for some reason.

The group also defended the city of Cranston in Jessica Ahlquist‘s battle, a fight they famously lost, costing the city a hell of a lot of money in legal fees.

December 31, 2013
The Downside of TED Talks as 'Secular Megachurches'
Next Post