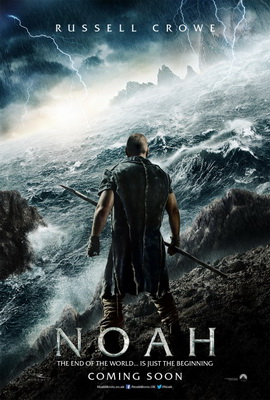 Even if you never saw The Passion of the Christ when it first hit theaters (and I have yet to see it), you probably couldn’t escape hearing about it. The Mel Gibson-directed, hyper-violent, all-Aramaic-and-Latin telling of Jesus’s last days was an enormous hit, with the faithful showing up to see it by the busload. Recently, the ironically-named History Channel had its biggest hit yet with a miniseries based on the Bible. The lesson here is that giving religion the Hollywood touch can mean big, big bucks.

Well, get ready, because there’s about to be a flood (ahem) of biblical blockbusters coming our way. But this time, they won’t be subtitled or relegated to basic cable. As reported by Nick Allen at The Telegraph, the A-listers are about to take on several episodes of God’s book.

In March audiences will be treated to Noah, a $150million special effects-laden extravaganza, in which Russell Crowe will build an ark and rescue mankind from the Great Flood. Harry Potter actress Emma Watson will play his adopted daughter, and Sir Anthony Hopkins is portraying Methuselah.

Here’s the trailer for Noah, and as you can see, this is no niche affair. This is the full blockbuster treatment.

We’ll soon be getting a telling of the Exodus with Christian Bale as Moses (he’s the prophet the Jews deserve, but not the one that they need), directed by Ridley Scott, who’s done religious conflict before in the so-so Kingdom of Heaven. Ang Lee will do his own Moses movie later on, Will Smith will do Cain and Abel, and even a movie with Brad Pitt as Pontius Pilate. (If he doesn’t deliver the 39 lashes to the beat of the opening riffs of Jesus Christ Superstar, then what’s the point?)

Now, on the one hand, this is somewhat frustrating. It means that the religious right will be able to point to these big movies and say, see, the American public is hungry for God and Jesus. All the while, churches and religious organizations benefit, putting the wind into the sails of explicitly-Christian studios (like Rick Santorum’s) to produce more garbage.

But on the other hand, the Bible is full of crazy, bizarre stories that if done for the sake of telling a good story, an amazing fantasy, rather than for promotion or proselytization, having the full muscle of Hollywood behind these films could make for some really compelling cinema. I mean, Noah is about the end of the world and a boat full of animals! That’s crazy!

December 28, 2013
The Badawi Apostasy Case and the Saudi Crackdown on Dissent
Next Post