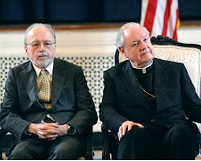 This is a sad and frankly strange story. On Monday, Robert W. Wilson, a multimillionaire hedge fund mogul and philanthropist, jumped to his death from his high-rise apartment in New York, months after suffering a severe stroke, at age 86. The reason this story is here is because Wilson was an avowed atheist, but one whose substantial philanthropy was directed not just at causes one might expect (the environment, cultural heritage, wildlife, etc.), but to Catholic schools.

Wilson had expressed a desire to make sure the vast majority of his money had been given away to good causes, and one of those causes for him was education. To him, public schools were a lost cause, telling Bloomberg News in 2010 that when it comes to teaching the fundamentals, Catholic Schools “do it better than the union-controlled inner-city schools.”

“I realized that Catholic schools were closing all over the country,” he told them, “and Bill Gates probably didn’t have enough money to save them.”

Wilson’s heart was in the right place it seems, and whether you agree with his decision to give his money to Catholic schools or not, it should trouble us that someone who was so willing to endow his fortune to good causes would reject public schools outright for not even being worth the trouble. But the last thing the Catholic Church needs is more money, particularly money for the purpose of indoctrinating children. It’s a shame that Wilson won’t have the chance to be persuaded out of it.

December 27, 2013
Inventor of the World Wide Web Brings Atheist Response to BBC's 'Thought for the Day'
Next Post

December 27, 2013 Atheism and the Need for 'Sacred Spaces' for Ritual: Are They in Conflict?
Browse Our Archives
What Are Your Thoughts?leave a comment